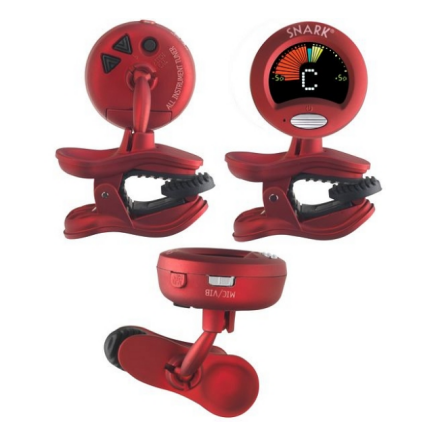 (contenu en anglais)
Afficher la traduction automatique
Afficher l'avis original
Clip-on tuners work by sensing the vibration in a stringed insrument, and displaying the frequency of that vibration as a musical note. Clip-on tuners have been around several years, but never fully caught on with guitar players until recently. This was largely due to the inaccuracy of the available models. Players were simply content to stick with their pedal tuners.

The Snark was designed from the ground-up to succeed where other clip-on tuners had failed. Featuring a wider cent range of A415-466hz, ultra-responsive sensor pad, and 360 degree rotating display, the Snark is a breath of fresh air for folks who value tuning without plugging in. But that's not all. The Snark also features a tap-tempo metronome, as well. It operates via one CR2032 coin battery.

The display is easy to read on a dark stage, and if positioned correctly, takes advantage of the instrument headstock's shadow to be visible in daylight outdoors venues.


It's even sensitive enough to pick up the E5 range on a mandolin, and The soft rubber clip contacts ensure that the snark won't mark or damage the finish on your instrument.

With a retail price of $19.95, it's worth having more than one Snark on hand. Buy a few, put one in each guitar case, keep one at home, one in your car, emergency kit, etc. You'll likely be glad you did.