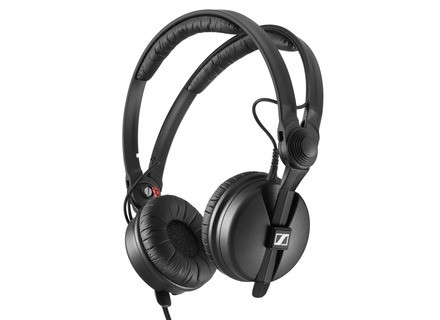 Sennheiser HD 25
5
Afficher la traduction automatique
Afficher l'avis original
Features aren't exactly aplenty on earphones. Some say they could do with a longer or coiled cord, but they must keep their record boxes a bit further away from their decks than I do! Ok, so the cord is a bit on the short side, but at least it's less of a chance to trip up on it! Everything is replaceable on them, so thats a bonus. They're also one of the few 70ohm cans in popular use, so for me anyway, they match perfectly to the headphone jack on my mixer. Couldn't really ask for anything else from a set of closed cup cans.

REALLY loud and still bang out bass without problems. These things are perfect for DJing. Sound quality is well rounded, although I find them ever so slightly lacking the clarity of audiophile quality cans. What they can do with levels though more than makes up for that. I really don't think I'd consider anything else to play out with, the only others on the market that can match this quality of sound at those levels are a bit big and cumbersome, and not terribly comfortable after a while wearing them. You could say these things do exactly what they say on the tin!

Just plug and play - not much more to say really! Haven't had to replace anything on them as yet, but given their simple design, I doubt it'd too much of a ball-ache to sort. The short cable might come under critism from people used to longer one's, but like I said, the flip side could also be said of somebody used to shorter cables having to then start using cans with a skipping rope's worth of wire haning off.

Simple classy design, and they really do feel robust. No signs of wear on them yet (half a year) and the replacability of parts means those things that do wear out wont wear out the entire set. Got to be the way all headphones should be made

Well, they're made in Ireland (just like me!) so thats 10 out of 10 right there! I'm so glad Sennheiser have made what I think is the perfect headphone. Light, durable, replaceable parts to keep the cost down in the long run, comfortable to wear for long periods, top notch sound quality and deafining, crisp levels. What more could a DJ ask for?