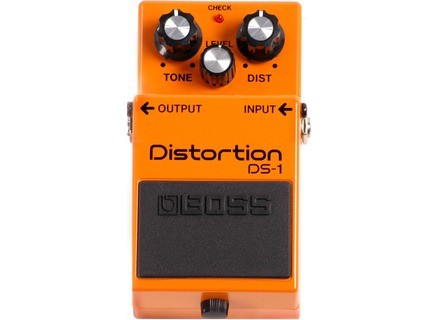 Boss DS-1 Distortion
2
Afficher la traduction automatique
Afficher l'avis original
The Boss DS1 for years has been a cheap way to get just a standard rock distortion tone. It's a very basic in its feature-set. There is only three controls, a tone (for adjusting your equalization frequencies, a level (for adjusting your overall output), and a drive (for adjusting the amount of gain or saturation being produced by the pedal. It, like the vast majority of Boss pedals is housed in the classic compact metal casing, painted a classy shade of orange. It has a single input and output jack set, and is powered by either a 9 volt battery or the Boss PSA adapter.

Just a very simple distortion unit overall. Nothing too fancy, which shouldn't be expected at the low price point that these sell for.

Setting up this pedal is very simple. There's no odd functions to learn, no tricks to it really. The controls do what they say and it it produces a distortion sound. Pretty basic to dial in and get tones out of, which is great for first time users/people who haven't had much experience with effects pedals before.

This pedal produces a very angry sounding distortion tone that is very grainy and somewhat harsh. It is great for styles like grunge (Kurt Cobain was a noted user of this pedal for a long time) where the tone is meant to be aggressive and raunchy. It's far from a very smooth sounding pedal for sure. Compared to the Super Overdrive SD1, it's much raunchier and angrier sounding with lots of clipping and harmonics. It's not a very versatile pedal, and it's not one I'm a fan of because of it's very brash nature overall.

I've used this pedal with various humbucker loaded superstrats, both as a standalone distortion unit and a booster for an already overdriven amplifier. As I stated above, I'm not a huge fan of the type of grainy distortion that this pedal produces so I can't really say I enjoyed using it very much. As a standalone unit it was just too grainy and buzzy for my tastes (I prefer a much smoother, rounder overdrive tone), and as a booster it took a nice smooth overdrive tone and made it too brash sounding. I'm sure that approach works very well for grunge, punk, or garage rock, but for the much more streamlined sounding rock I play, it just didn't work for me.