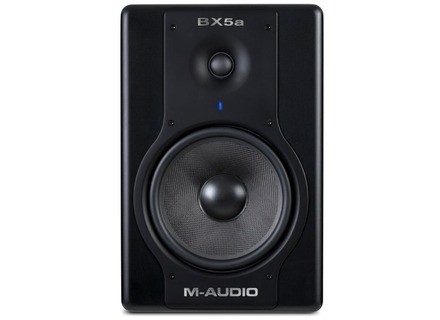 The M-Audio BX5a's have graced my speaker stands for over 4 years now! Back in college I decided that it was time to move on from headphones and a TV surround system. I did have a budget but I wasn't going to cheap out on this purchase. Studio monitors are arguably the most important part of your setup. If you go with something too cheap, chances are you are going to hear it. A lot of cheap models "sound" alright, but when you dig into it they are just boosted in certain frequencies like bass. When looking for a pair of monitors you want to try and find a pair that has a flat EQ. The Bx5a's are active monitors so you won't have to worry about buying and amplifier. In my opinion the M-Audio BX5a's are the way to go.

If setup properly (as displayed in the manual) you will enjoy excellent stereo imagery. With a 56Hz - 22kHz frequency response the BX5a is great for that intermediate engineer, musician or avid music fan. Yes, we can hear down to 20Hz, but does it make a difference to the average person, not really. If you are a fan of loud bass you can still look forward to being punched in the chest by the BX5a's. The monitors function well at a low volume also (some speakers/monitors completely cancel out frequencies when turned down).

I REALLY like the sound and so do my non-engineer friends who hear them. They really are monitors where you will hear a song somewhere and wonder how they sound on the monitors. My recommendation is to get the DVD audio mix of Hotel California, sit back and enjoy! These monitors have a really nice high end, I especially like the 1kHz response (it's very crisp compared to the BX5 D2). The 5" woofer gives off a solid punchy bass that doesn't drown in it's own signal. The tweeter is 1" and has a 22kHz response putting it over the range of human hearing.

The BX5a features a 5" woofer made out of a kevlar cone. This was the first kevlar cone I had ever heard and I just love it. Like I said above, the bass is snappy and is like a nice punch. On top of all that, it looks pretty cool!

Although I haven't brought them outside of a recording environment, I would bet that they sound great in other applications such as at weddings, small outdoor events, parties etc. Don't be afraid to watch a movie or two using the BX5a's, they handle movie sound just as well as music.

What I liked most was the sound. It has a wonderful sound and you would think that the BX5 D2 would be the same if not be improved, but this isn't the case. I work with the BX5 D2's in the studio I work at and they just don't do it for me. They have a strong punchy mid and low-high range but the lower range just doesn't feel right. I am in no way someone who boosts the bass or listens to songs for the heavy bass, in fact it turns me off to hear overpowering bass, so don't think I'm some bass nut who wants the neighbourhood to feel what I'm playing. What I liked least was the touchy volume knobs. For me it feels like I adjust a lot and get a little bit more signal and before I know its it's too loud and I have to turn it back down. It might just be my mind playing tricks on me though!

Excellent value for price. I can't remember exactly how much I paid but I know it was the best choice at the time (cost and quality were the major deciding factors for me). The KRK's were a choice made by many around me and I'm glad I didn't go with them. The KRK's were just too much for me, it felt like I was being bombarded by sound, yes I could get use to it but I'd rather not. The BX5a's are gentle when you want them to, and a workhorse when you need them to be. The BX5a's are pretty flat in their frequency range. M-Audio didn't try to "pull a fast one" and boost favourable frequencies to make you perceive the sound as good.

I didn't test out many other models before buying the M-Audio's. I had already heard many different monitors in the past so I kind of knew where to aim. Knowing what I know now, yes I would make the same choice. When it comes time for better monitors I think I will keep the BX5a's as my B monitors, I've used them for years so I know what to expect out of them.