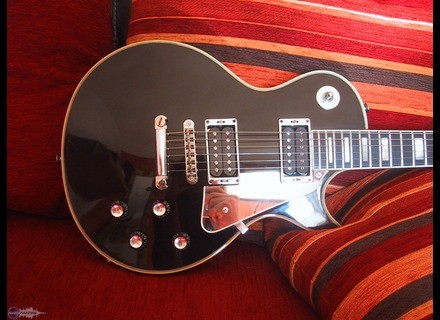 Voir les autres avis sur ce produit :
Afficher la traduction automatique
Afficher l'avis original
John Sykes is one of my favorite guitar players. He isnt that well known but his work is well known. He was one of the last guitars players in Thin Lizzy and he wrote much of Whitesnakes self titled album which turned Whitesnake into super stars although he was fired right after the album was completed. This is a tribute to his guitar. Gibson put out two version of this guitar. There is a version that has a ton of wear on it to simulate how Sykes guitar looks now. This is the other version that does not have any wear on it. The worn ones are super expensive and rare. This guitar is basically a 70s Les Paul Custom with some John Sykes addons. This guitar has a mahogany body with a maple top. The neck is maple like a 70s Les Paul Custom. The guitar is black but all the hardware is silver or chrome. The pickups are not correct for the ideal Sykes sound. This guitar has Classic 57s which are nice but the Sykes sound from back in the day was done with a Dirty Fingers in the bridge, Gibsons hottest pickup.

This guitar plays very well like Sykes personal guitar. I has an ebony fretboard with really big frets like Sykes likes. You can get the action very low on this guitar because of the Gibson Plek process. The guitar has a nice heavy feel like an old Les Paul Custom as well. I dont think there is any weight relief on this guitar. The maple neck is something you dont get on Les Pauls anymore but it was common on the 70s. The maple neck sounds slightly different but the main thing about it is it was much stronger than the mahogany necks. The headstock angle Gibson uses with their guitars means they are prone to breaking and with mahogany being a pretty soft wood this makes them break a lot. The maple neck is much stronger and more stable.

This guitar doesnt really have the true Sykes sound. John Sykes recently switched to these pickups in his personal guitar but the classic Sykes sound is a Gibson Dirty Fingers. This guitar has a set of Classic 57s which gives more of a traditional Les Paul sound. The Dirty Fingers tone was a very hot 80s tone which Sykes is usually associated with. The tone from the Classic 57s is good but not very Sykesy. You get classic PAF tone with these pickups. The maple neck gives a slightly different tone as well. It is slightly brighter than a normal Les Paul which is part of the Sykes tone. The brighter tone with the Classic 57s gives this guitar a unique sound. It is very oldschool but clear as well.

This guitar is great for any Sykes fan. He is a legendary guitar player for the people who know his work. He was one of the few people who stuck with the Les Paul throughout the 80s and was able to play popular music of the time on it. He is a real player. This tribute is nice. It is cool that they made a clean version and a reliced version. His guitar has a ton of wear on it so the reliced version may be too extreme for some people. These guitars are pretty expensive like you would expect from a Gibson Custom Shop model. If you cannot afford this Edwards makes a great Sykes tribute guitar that comes with Seymour Duncans. This gets you a little closer to the true Sykes tone and it is only about one thousand dollars so it is much cheaper than this. If you can afford this one by all means buy it. If you are a Sykes fan but do not have as much money the Edwards Sykes tribute is a good alternative.
John Sykes est l'un de mes guitaristes préférés. Il n'est pas bien connue, mais son travail est bien connue. Il fut l'un des joueurs les guitares dernier Thin Lizzy et il a écrit beaucoup de Whitesnakes auto album intitulé qui s'est Whitesnake en étoiles super-bien qu'il a été congédié juste après l'album a été terminé. Ceci est un hommage à sa guitare. Gibson sortir deux version de cette guitare. Il ya une version qui a une tonne de vêtements sur elle pour simuler la façon dont la guitare Sykes ressemble maintenant. C'est l'autre version qui n'a pas d'usure sur elle. Les plus usés sont super cher et rare. Cette guitare est essentiellement une Les Paul Custom 70 avec quelques addons John Sykes. Cette guitare a un corps en acajou avec une table en érable. Le cou est l'érable comme un personnalisé 70 Les Paul. La guitare est noire, mais tout le matériel est en argent ou en chrome. Les micros ne sont pas corrects pour le son idéal Sykes. Cette guitare a 57s Classic qui sont belles, mais le bruit de Sykes retour dans la journée a été réalisée avec un Dirty Fingers dans le pont, le ramassage chaudes Gibsons.