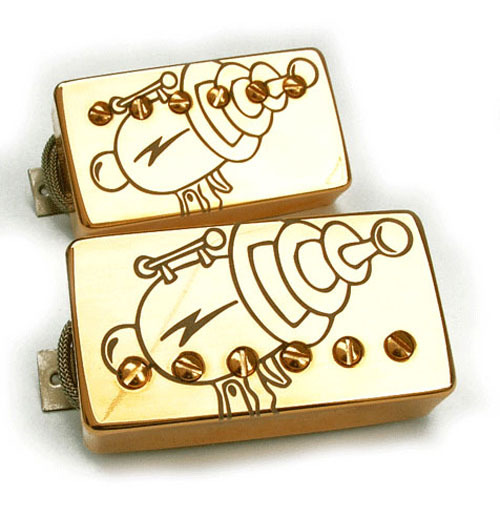 (contenu en anglais)
Afficher la traduction automatique
Afficher l'avis original
The Bare Knucke Pickups Rebel Yell is a pickup made for Steve Stevens. It’s part of the contemporary line, but I find it’s not nearly as aggressive as some of the other contemporary pickups that Tim offers. It features slugs on one end, adjustable pole pieces on the other, Alnico V magnets for both the neck and bridge and four conductor wiring is standard. It also has tons of other options you can choose from, including some really neat ray gun inlays on the covers.

Steve Stevens was looking for someone to create some custom pickups for him, and he turned to Tim at Bare Knuckle Pickups. After some tweaking, Tim made the Rebel Yell, named after Billy Idol’s famous song. This pickup really growls, too. It’s got this vintage sounding overtone going on, but it’s still modern enough to where it is tight and aggressive. The bass on this is pushed back a bit, but it’s a more vintage style bass. It’s not that super in your face bass that the Warpig has. The midrange on this is boosted a bit to help overdrive the amp. It’s almost like a 500T at times with the midrange. The treble is boosted a touch, but it’s far from being harsh and brittle. It seems to have just the right amount of treble to really cut. Split coil and parallel tones also work wonderful with this pickup.

I found that this pickup tends to work in more neutral to darker sounding woods. It really lends itself to sounding nice in alder and mahogany guitars. These seem to really allow the pickup to shine and show its true nature. Those looking for a super high output pickup will probably want to look elsewhere in the BKP line, but those who want a more classic rock/80s heavy metal kind of tone should adore these pickups.