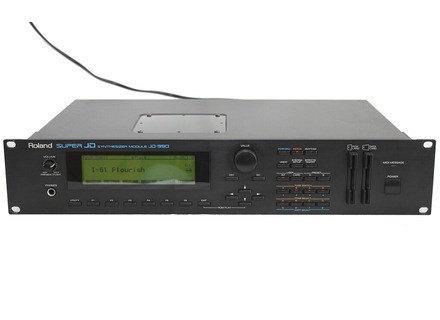 Voir les autres avis sur ce produit :
Afficher la traduction automatique
Afficher l'avis original
Based on todays standard it's a little low on the avalible patches and voices. I love the ability to edit a digital bassed synth from the front screen. Only now are they getting screens that show this much detail on a synth to edit it from. I think there are 6 outs, standard midi I,O,T, Strange ass Plug for power. 2 slots in the front for Memory card and Rom's, and a internal JV card (most people use the Vintage card)

Other than it's a Roland and it is at the start of rolands use of rolands combo buttons it's one of my favorate rackmounts. Editing is as close to a pc as I have seen on a synth without knobs and sliders.

Built like a Tank. I would replace it again....and again..... and Again.... Verry happy with the build of this unit other than the odd power cord.

One of the best products from roland in the early 90's. It set the scope for the JV-1080,JV-2080 and XV line. One of the Big thing's they was exploiting in the XV line was the fact that it had the JD waves. It has crisp basses,lush strings,excelent pads. You can press down or up to darken or weeken the sound. I have the Vintage card installed in mine so I can pull up any of the patches from that as well as the ones made specialy for the JD-990. I use a card so I have a extra 64 presets or I place on the 3 sets of rom/card in for added pleasure

This thing gets used. All the stuff in the studio is a workhorse and has it's purpose. This thing has been around for along time and I have never thought about droping it back in the market. I use it alone, as a layering device.