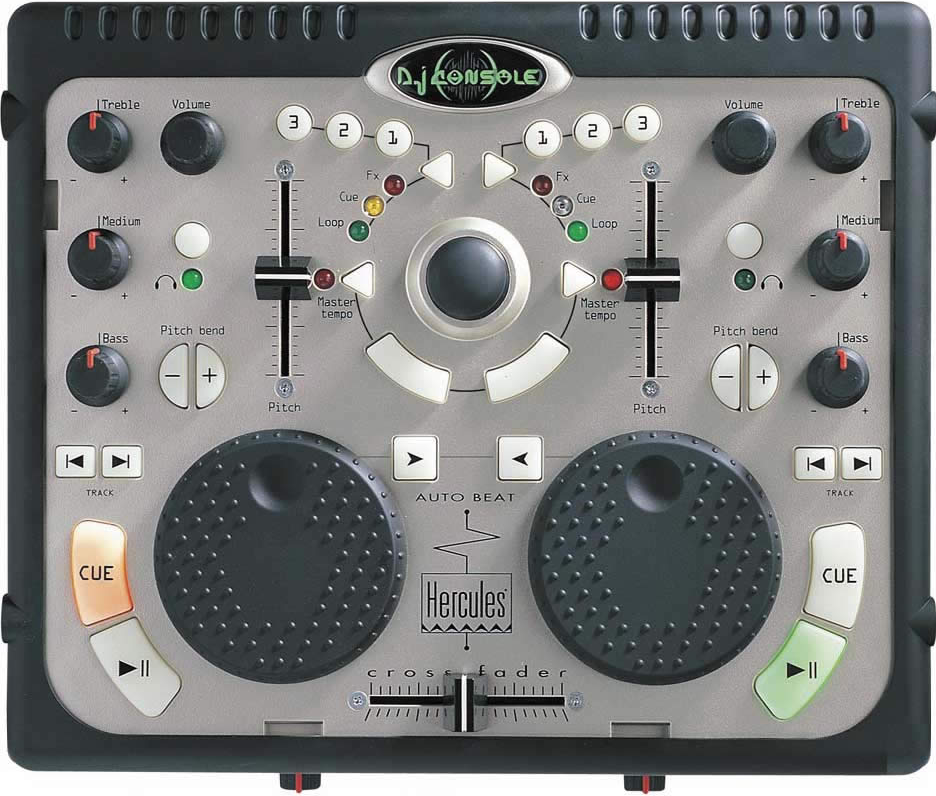 
5. Can I mix directly from Audio CDs in the DJ mixing software?
Yes, you can mix Audio CDs directly from your CD/DVD-ROM drive in NewDJ, Virtual DJ and Ots CD Scratch 1200. In NewDJ and Virtual DJ, simply load the CD-Audio track in your playlist on a DJ Console deck, as if it were an audio file, and you can mix it immediately.

7. What can I do with Hercules DJ Console?
DJing for beginners starts with performing 3 main operations to animate a party:

a) Starting the music: set a start point (cue point).
Since some tracks start too slowly for dancing, the DJ selects the moment when he or she wants playback to begin: this is called a cue point (CUE button).
The DJ sets the cue point by pressing the CUE button at the right spot in the track, when the track is not in playback mode, in both Virtual DJ and NewDJ.
The DJ can then go straight to the cue point when playing the track:
In Virtual DJ, play the track by pressing the Play/Pause button, then press the CUE button to automatically go to the previously-defined cue point.
In NewDJ, press the Play/Pause button and the track automatically starts at the cue point.
Switching from one track to another without disturbing the dancers.

b) Avoid a gap between tracks: use the Crossfader slider.
After loading one track on each deck, when playing both files (press the Play/Pause buttons) you can switch from one track to the next for the audience by sliding the Crossfader slider from one deck to the other. => Once you are comfortable crossfading, you can DJ at a party. However, there are other things you can do to make the experience even better.

Synchronize the rhythms of 2 tracks: use the AUTO BEAT function.
Your audience will find it easier to switch gradually from one rhythm to another when they are dancing, rather than be confronted with an instant rhythm change. Whenever possible, you should synchronize the beat of the track you are playing with that of the track which will follow it.
Calculate the Beats Per Minute (BPM) for each track
In Virtual DJ: select the audio file, right-click on it with your mouse and select Analyze. The software then calculates the average BPM for the track. In NewDJ SE: when listening to music on your headphones, click NewDJ’s BPM Count button on each beat, and NewDJ instantly calculates the track’s BPM.
Synchronize the BPM of track B with the BPM of track A:
Once you have measured the BPM of the tracks on decks A and deck B, when you press the AUTO BEAT button on deck B, you change the BPM of deck B to match the BPM of the track being played on deck A. You can then use the Crossfader slider to switch from track A to track B, and dancers won’t be bothered since the rhythm of the music won’t change. You can then reset the original BPM on deck B by adjusting the Pitch slider.
=> Once you have synchronized the BPM when switching from one track to another, dancers can keep the same rhythm when dancing to the new track.

You can then set the Crossfader completely on Deck
=> By following this procedure, you smooth out the audio transition from deck A to deck B, giving the dancers the feeling that the two tracks are connected.

10. Why are there 3 audio modes for Hercules DJ Console: 5.1 (Standard), DJ (Advanced) and ASIO?
The main difference between Standard (5.1), Advanced (DJ) and ASIO modes is the headphone output management:
In Standard/5.1 mode, the headphones use playback channels 1 and 2, which means that the user hears over the headphones what is being played on the front speakers.
In Advanced/DJ mode, the headphones use playback channels 3 and 4, for the DJ to:
Play audio for the audience in stereo on channels 1 and 2.
Get a headphone pre-listening (on channels 3 and 4) of the audio mix being prepared.
The other additional function Advanced mode in the Talkover function (cf point 13)
ASIO is a driver setting created by Steinberg. With some music software applications, channels 1 and 2 are duplicated in ASIO mode on the headphone output, as is the case in 5.1 mode. Most software that supports ASIO will also have a WDM setting.
Whatever the mode, the audio file formats are the same (WAV, WMA, MP3…).

14. How can I use my headphones with Hercules DJ Console?
You can use your headphones in 2 different ways:
- Live monitoring: listen to the music being played for the audience on the front speakers over your headphones. Set the audio mode in the DJ Console Mixer to Standard.
- Music pre-listening: use your headphones to listen to the track you are currently preparing, while playing another track for your audience. Set the audio mode in the DJ Console Mixer to Advanced and press the appropriate headphone button on your DJ Console (the corresponding headphone LED will light up).
We recommend headphones with an impedance of between 24 and 200 Ohms. If you use 600-Ohm headphones, the headphones volume won’t be sufficient for you to hear the track you are pre-listening over the music on the speakers.

15. What is Hercules DJ Console’s latency in ASIO 2 mode?
The latency depends on your PC’s CPU speed, its OS, and the software used. On today’s computers running Windows XP, you can expect latency of between 5 and 6ms.

16. Why are Hercules DJ Console’s ASIO 2 drivers limited to 48KHz with no 44KHz support?
The USB audio clock is close to 48KHz, so files sampled at 48KHz are played directly via USB while files sampled at 44KHz are over-sampled at 48KHz by the CPU to play via USB, which increases the latency for 44KHz files. Considering that the latency via USB for 44.1KHz files is not much better in ASIO 2 than in WDM mode, while ASIO 2 has a latency benefit at 48KHz, we have determined that WDM drivers are sufficient for 44.1KHz files.

17. Can I connect a vinyl turntable to Hercules DJ Console to mix my vinyl records?
With the bundled software, you cannot mix an analog source on the DJ Console in real time. In order to work with music from vinyl records, you must first digitize the music on your PC before you can mix it on your DJ Console. You cannot simply connect a turntable directly to your DJ Console’s Line input to digitize vinyl records on your PC, since the audio output on turntables is too low (phono level instead of line level) to be captured properly. To digitize your records, you must either:

Connect your turntable to your amplifier, connect the amplifier’s headphone output to the DJ Console’s Line input, and then record your vinyl onto your PC.
If you need a more compact solution, you can use a pocket-sized phono preamplifier to connect your turntable to your DJ Console:
Cheap solutions, below €50, can be purchased from manufactures such as Hama.
Higher-end solutions, below €100, as ProJect Phono Box or NAD PP-2.
Once your vinyl music has been digitized on your PC, you can then use the audio files with all your music software.
To mix in real time with an analog vinyl turntable, you will need the Pro version of Virtual DJ (not bundled with the DJ Console) to synchronize DJ Console file playback with the Line input (via a phono preamp): the vinyl turntable will not be recorded on the DJ Console, which will simply analyze its BPM to synchronize DJ Console virtual mixing with the analog turntable.

18. What are the differences between the Virtual DJ version included with Hercules DJ Console and Virtual DJ retail (Pro) version?
The differences are listed on https://www.virtualdj.com/products/comparison.us.html. The retail version of Virtual DJ (sold at €99) includes the following additional features:

Support of sound devices other than Hercules DJ Console.
Virtual scratching on the jog wheels (with the DJ Console version, you can scratch with the mini-stick. You must enable this function in the Virtual DJ SET menu, in the controller setting, and you can then scratch on a deck for which monitoring is enabled (headphones LED on)).
Real-time mixing of an external sound source.
MIDI keyboard support.
PCDJ DAC2 and Numark DMC1 controller support.
Support for free plug-ins downloaded from https://www.virtualdj.com/addons/addons.html.

19. How can I use cue points with the Virtual DJ software?
Cue points are markers you place in an audio file to instantly access a specific point in a track. Hercules DJ Console allows you to set up to 3 cue points.

20. The Virtual DJ volume and pitch functions are inverted compared to Hercules DJ Console’s buttons. Can I adjust this so that they are the same?
Yes: click on the SET button in Virtual DJ and then change the DJC pitch/vol option to Normal instead of Inverted.

21. How can I automate the playback of playlists in Virtual DJ?
VirtualDJ lets you automate playlists so that the DJ can take a break without stopping the music at a party.

Click the Playlist vertical menu to the right of the file list.
After opening the Playlist, lock it by clicking the padlock icon.
Drag and drop audio files you wish to automate from the file list.
Click the Automix button.
VirtualDJ will then play file after file, synchronize the BPM during transitions, and fade from one file to the next.

22. What are the differences between NewDJ Standard Edition (included with Hercules DJ Console) and NewDJ Pro?
NewDJ Pro will be released in February 2004 and priced at €99. The extra features found in NewDJ Pro are listed at ); return false;" rel="nofollow" target="_blank">http://www.newdj.com/en/products.htm:

23. Why doesn’t Hercules DJ Console have a standard 1U rack format?

26. My DJ Console sometimes starts playing audio by itself, very slowly, as if I were turning a jog wheel. Why?
Some early-production Hercules DJ Console units were manufactured with highly-sensitive jog wheels: under certain conditions, this can lead to simulating the continual turning of a jog wheel while it is not in use. This condition has now been corrected and can be rectified by reprogramming affected DJ Consoles, stabilizing the sensitivity of the jog wheels regardless of operating conditions. Users faced with this issue can return their complete DJ Console package (console, cables, CD, manual, etc.) to Hercules in the original packaging, and we will gladly reprogram the unit. If you encounter this problem, please contact our technical support staff (contact details are available in your User Manual), who will establish whether or not your unit is experiencing this form of jog wheel hyper-sensitivity and, if so, explain the procedure for returning your DJ Console. We apologize for any inconvenience this may cause and thank you for choosing Hercules products.