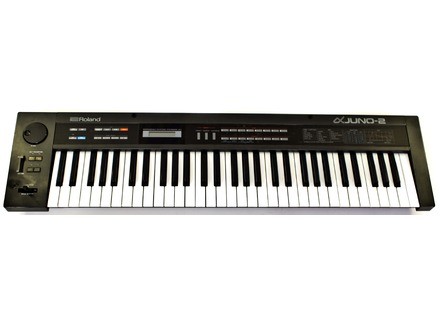 Roland JUNO-2
5
Afficher la traduction automatique
Afficher l'avis original
This is a vintage synthesizer from the 80s. Though it is an analog synth, it has some digital controls, which made it a unique hybrid of the technologies. There are 64 presets as well as 64 user memory patches, meaning there is a lot of room to customize the sound. The digital controls includeDCO digitally controlled oscillators, LFO, bend, ENV, pulse, waveforms, noise, PW/PWM, high pass filter, VCF filter with freq/env/res/lfo/kybd, VCA envelope, chorus and others. There are really nice analog filters on it too. It's not new enough to be computer-updated and it is not rackable.

This is a pretty easy synth to use, honestly. The digital wheel controls all of the settings on it as well as the presets and the channels. Switching between sounds on the fly is tough, perhaps it's better suited to studio use for this reason, though I'm sure with practice you could switch it quickly enough to get comfortable for using it live at a venue. It's pretty easy to set it up and get it going too. The manual explains everything pretty clearly overall, there's certainly a lot to cover with it but it's all in there.

The sounds made from this synth seem to be a little ahead of their time for a synth that was released in 1985. Most of it sounds like 90s rave-style stuff. Prodigy and Fatboy Slim are two of the more notable people who have been known to use this synth, and thus countless imitators have also used it for the same reasons. I think overall it doesn't have realistic emulations of real instruments, but that's not really why I would use it anyway, nor do I think anyone else would use it for that reason. One advantage that this model has over its predecessor, the Juno-1, is that it is touch sensitive. That's a big advantage for me personally, as I like to be able to control dynamics with my playing as much as possible. The effects are great, the analog filters are the best part about it. It's a great hybrid of analog and digital technology overall. It's capable of fat, booming bass sounds as well as spacey, high pitched effects. It's got it all really. It doesn't have the warmth of an old school Moog or something like that but it's still a great synth.