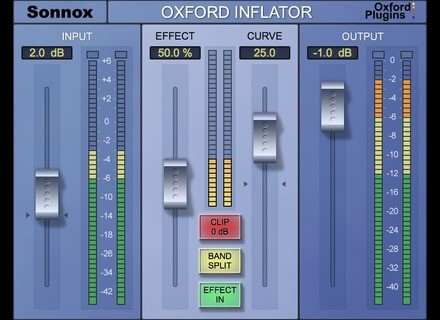 Un must have donc!

Sonnox Oxford Inflator
5
Afficher la traduction automatique
Afficher l'avis original
The Sonnox Oxford Inflator is a software plug-in to be used inside a DAW. It can be downloaded off the Sonnox website for installation, and authorized using an iLok. This plug-in can be purchased independently or as part of several bundles from Sonnox. I purchased the Sonnox Enhance bundle and received the Inflator.
The controls of this plug-in are as basic as any plug-in. If you can't figure it out in the first 30 seconds of trying the plug-in out, you can watch videos that show you what to do. In reality, all you have to do it move the 'Effect' slider up until your music sounds better. No further explanation needed.

It is hard to precisely describe what this plug-in does. The effect is very dramatic, and very pleasing to the ears. Some people say that it adds a 'magic' to their audio. I simply think it makes audio sound better. My understanding is that the 'effect' increases the presence of harmonics in the signal. To me, it makes audio sound closer or 'in-your-face'. There must be some psychoacoustic phenomenon that this is based on. Whatever it is, its great.

This plug-in is simple - it makes your tracks sound better. Use it on individual instruments or on a mix bus and it will make a difference. This may be the only plug-in I have ever used that always sounds good. For most plug-ins, I might insert them on a track and decide whether or not it sounds better. The Oxford Inflator never fails. I rarely use the 'Effect' at 100%, usually I settle somewhere between 50% - 75%. I usually leave the 'Curve' setting at 0.0, unless a track is really dull and I want to add some high-frequency emphasis.
I use this plug-in on every session I mix, and I would hate to try to mix without it.
I consider this particular plug-in to be my favorite from Sonnox because it is very unique. There are many companies that have 'limiters', 'compressors', 'transient designers', 'reverbs', etc. The Inflator is one-of-a-kind.
The Inflator is also very useful for increases the 'perceived' loudness of a music track during mastering while still maintaining the peak amplitude. This is one thing that can help make your demo tracks sound closer to professional.
Le Sonnox Oxford Inflator est un logiciel plug-in pour être utilisé à l'intérieur d'une application DAW. Il peut être téléchargé sur le site Web de Sonnox pour l'installation, et a autorisé l'aide d'une clé iLok.
Les commandes de ce plug-in sont aussi fondamentales que tout plug-in. Si vous ne pouvez pas le comprendre dans les 30 premières secondes d'essayer le plug-in sur, vous pouvez regarder des vidéos qui vous montrent ce qu'il faut faire. En réalité, tout ce que vous devez le faire passer de «l'effet» curseur vers le haut jusqu'à ce que votre musique sonne mieux. Aucune autre explication nécessaire.

Sonnox Oxford Inflator
4
Afficher la traduction automatique
Afficher l'avis original
I had no trouble installing the Sonnox Oxford Inflator on my machine. It was as straight forward as installing any plug-in that I have. I also had no compatibility issues at all. I never had a need to look at the manual as it is a straightforward plug-in, so I can't speak to how useful it is or not.

I am running the Sonnox Oxford Inflator with a Mac Book Pro that has a 2.2 Ghz Intel Core 2 duo processor and 4 GB of RAM. I am using it in Pro Tools LE 7.4 with a Digi 002 rack audio interface. It get great performance from this plug-in, but have only used it on one stereo track at a time. For this reason I can't say how fast it would be if you threw up a bunch of these on a bunch of different tracks because I haven't done it, but its really not made for that and I wouldn't be surprised if you couldn't run too many of them. Since it is really a mastering type plug-in I wouldn't expect it to anything more than it is made to do, and it is great at what it is made to do.

I've been using the Sonnox Oxford Inflator for about four years. It is an overall great sounding plug-in and is really capable of jacking up your overall volume on the master fader. It is very easy to use as it has a threshold slider, a out ceiling slider, and a release slider. It also has a few modes in terms of quantize, dither and shaping. The meters for everything is very helpful as it allows it to really show you where you level is at so you can set it exactly where you want it. It is real easy to get a louder signal on your mixes with and without smashing it to your hearts content. You can be subtle and it works for that application too, and it has a pretty clean signal overall. For what it does, the price is definitely reasonable and while you can get some other master limiters cheaper, the Sonnox Oxford Inflator has a reputation and quality that is hard to match. The Sonnox Oxford Inflator has become the industry standard for software based master limiting.

Sonnox Oxford Inflator
5
Afficher la traduction automatique
Afficher l'avis original
The Sonnox Oxford Inflator is a plug-in designed to give your sound more warmth and presence.  I didn't have any issues with it as far as installation was concerned as it only took a few minutes.  The interface of the software is one of its best features since it is so easy to follow and to use.  It simply has sliders for input, output, effect, and curve, as well as buttons for clipping and band split.  I haven't seen the manual for this plug-in so I can't say too much about it, but I don't think that one is necessary as it is easy enough to figure out how to use on its own.

I am currently running the Sonnox Oxford Inflator plug-in on a Mac Book Pro that has a 2.2 Ghz Intel Core 2 Duo processor and 4 GB of RAM.  I run it in a Pro Tools LE system that runs with a Digi 002R audio interface and version 7.4 of Pro Tools LE.  I'm able to use this plug-in as much as I would like within this configuration, as it is a plug-in that won't take up much processing power at all.  This of course really depends on the type of system that you are running, but if you are currently able to run plug-ins without issues, you won't have any problems with this one in terms of performance.

While the Sonnox Oxford Inflator plug-in isn't an essential to anyone's plug-in collection, it is a plug-in that comes in handy for me.  If I don't have any access to outboard gear to fatten up my signal, this plug-in works well to help me do so.  The price is reasonable for either the TDM or native version and is definitely accessible to both professional and home studio owners.  Again, while I don't think that this would be a good place to start your plug-in collection by any means, if you are looking for some new plug-ins to spice up your sound and capabilities a bit, definitely check out Sonnox's Oxford Inflator.