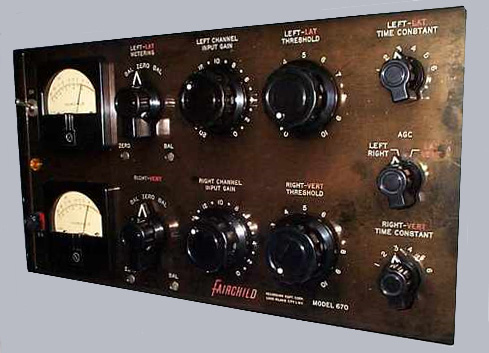 (contenu en anglais)
Afficher la traduction automatique
Afficher l'avis original
The Fairchild Audio 670 is a classic stereo compressor and is one that has been imitated quite frequently over the years.  It is an all analog unit and I'm not sure what types of connections it has since the one I have used was already racked in a studio.  It isn't a traditional rack mountable unit as it has its own shape.

The configuration of the Fairchild Audio 670 is easy to follow as the parameters found on this unit are pretty standard.  If you have used dynamic processor in the past I don't think that you'll have any trouble figuring out how to use the 670.  Each of the two channels has parameters for input gain, threshold, and time constraint.  Each channel also has a changeable meter that has a few different options.  Since this is an old piece of gear, I've never seen a manual for this but have also never been in a situation where I would have needed one.

The sound quality of the Fairchild Audio 670 is outstanding.  There is a reason that this has become such a highly sought after piece of gear and it is due to this outstanding tone.  It is a suitable compressor for just about any situation, but I like using it mostly for vocals, electric guitars, snare drum, and bass drum.  It has a crunchy tone and can really fill out a tone if it is lacking something.  While it definitely does the job of a traditional compressor, it also adds a certain something to your tone that can be described as punchy.  It is overall a great sounding compressor and is a tone that has been sought after by engineers over and over again.

All in all, the Fairchild Audio 670 is one of the best compressors ever made.  While they are now hard to find, they have a sound that has been used on classic recordings for years.  There is really nothing like the sound of this compressor and if I had a choice to only use a single compressor, the 670 would definitely be in the discussion.  While there are some decent plug-in emulations of the 660 and 670, there is nothing like the original and is a piece of gear that all engineers should try sometime.