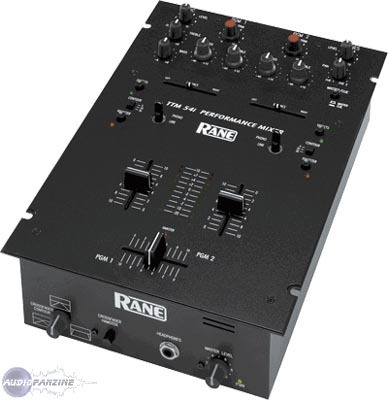 (contenu en anglais)
Afficher la traduction automatique
Afficher l'avis original
Excellent. The one thing I'd change/modify would be, having the EFX Post-Channel/Crossfade, like the TTM 56 & Empath models, instead of Pre-Channel/Crossfade.

Simple & clean, very easy to use!

I've had my TTM 54 since 1999. This was my first battle style mixer. I chose this one over Vestax purely on the Rane name. From my experience, RANE made great gear, so when They started making Battle mixers, I didn't hestiate to get one as soon as it came out. I've only had it repaired once. The RCA outputs shorted out, and I sent it back to RANE. Got it back &quot;quick-fast&quot; too, 2-3 Bus. Days. No problems since.

I prefer this model to the newer &quot;TTM 54i&quot; version. IMO, it feels Mo' Betta'. Also, I like the Metal phono/line switches instead of the plastic ones. This mixer has gone through the good/bad Gigs. I've had several TTM54s but sold most off, except for THIS one. Btw, they're built like tanks.