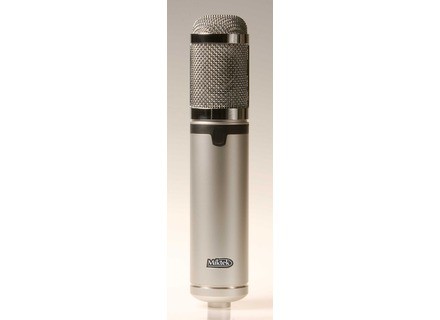 Miktek CV4
5
Afficher la traduction automatique
Afficher l'avis original
The Miktek CV4 is a large diaphragm tube condenser microphone with up to 9 different polar patterns. It has a very sleek stainless steel look to it and it come with the shock mount and a hard case to protect it. You will not get anymore out of a large diaphragm tube microphone than the Miktek CV4 will deliver. This microphone will pick up everything that is going on around you, that is the reason that I say stay away from it for live use. You will need to mess with the pick patterns and be careful of your environment when recording with it. It has a very warm natural sound that any vocalist or engineer can appreciate. If you are looking for a really big sound, then the Miktek CV4 will handle that for you.

The Miktek CV4 has an extended low frequency response, basically its more of a classic warm sound that has a natural vintage feel to it. All of the low end when you record with it is very clean and somewhat even bright. It really sounds well rounded on the low end, while not over doing it and making it sound to heavy. The CV4 is well built , it was actually built by hand and is one of the few microphones that still get completely hand made. The value of this microphone is right on with the price point. It does cost a good chunk of change but the quality sound matches was it cost. Knowing what I know now, I would have got this microphone a long time ago if I could do it again. It gives you a natural warmth in your mix without even having to do much to it. It’s quality fits great for any style of music and in any environment. You just can go wrong with the CV4. We plan on getting another one of these sometime next year.

Miktek CV4
4
Afficher la traduction automatique
Afficher l'avis original
I had never heard of Miktek before I got this mic. Now I am a fan. This was recommended to me by a couple of professionals when I was looking for a higher end vocal mic a couple of years ago. I'm not super familiar with the specs as I bought it basically without researching it. This would've been a bad idea if the mic turned out to be garbage for fortunately it isn't.

I think a lot of people look over this mic because it appears to be a run of the mill condenser from a somewhat under the table brand for a hefty price. Let's face it, people who pay big bucks for vocal mics don't mess around. After you get past the thousand dollar mark you get into the big leagues, and it's a sink or swim market. I know this because I've owned my fair share of priced up mics.

The CV4 is very tubey and vintage sounding vocal mic. (I believe it was really designed for vocals only, although I have used it on acoustic guitar is it's pretty nice for that if the guitar is right. I have heard a lot of people refer to these as sounding silky and I would say I agree with that. It's a very deep warm mic that lends itself nicely to any female voice and some male tenors like myself. There are very few vocal mics that can be amazing for all voices. Most of them are in the 3k range and even those can only go so far. But for female vocals, this is probably my favorite mic right now. Unfortunately it pretty much butchers male vocals unless the guy has a higher voice. I have a harsher voice so sometimes I use the CV4 for tracks that I don't want my voice to stick out. This mic smooths it out. It has an ugly proximity effect so you have to give it breathing room. Not a problem for female vocalists anyway.

I will also say it's a good space mic for acoustic instruments. It can warm up a harsh sounding snare drum or acoustic guitar my placing is about 3 feet away from the primary mic. I think this is because of the 8 pattern feaature which really livens up a room sound in a way I can't describe.