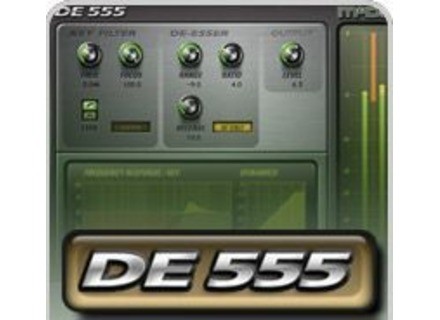 McDSP DE555
5
Afficher la traduction automatique
Afficher l'avis original
Installing the McDSP DE555 was a quick and easy process as I experienced no issues at all. I had no compatibility issues at all with my configuration and the interface of the plug-in couldn't be any easier to follow. The plug-in contains three sections - one of key filter, one of de-esser and one for output. The key filter section has parameters for frequency and focus, as well as buttons for choosing type and bypass. The de-esser section has knobs for range, ratio, and release and the output section simply has a knob for level. Within the McDSP DE555 also lies two graphs that show both frequency response and dynamics. I don't have the manual for the McDSP DE555, but it is easy to install and use so you shouldn't really need one.

I am currently running the McDSP DE555 on a Mac Book Pro that has a 2.2 Ghz Intel Core 2 Duo processor and 4 GB of RAM. I run the plug-in in Pro Tools LE 7.4 that runs off of a Digi 002R audio interface. With the configuration I've never had any issues at all running this plug-in, and I am able to run a few of them at once if I so please to, but I usually don't use this all that often and when I do I will only use one or two at a time. However, it is good to know that you could run a bunch at once if you wanted to.