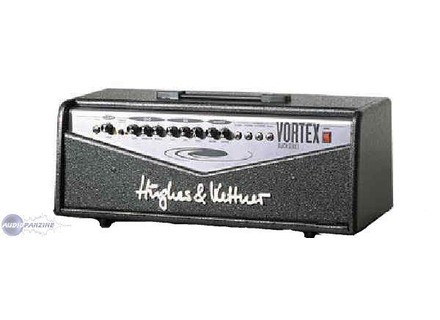 Hughes & Kettner Vortex Head
3
Afficher la traduction automatique
Afficher l'avis original
Hughes and Kettner have some of the best sounding amplifiers on the planet. This a German company who designs high quality guitar amps for touring musicians and the average consumer. They guitar amps that range from just a few hundred dollars to several thousand.

Some big names have pickup amps from Hughes and Kettner including Alex Lifeson from the band Rush and Tommy Thayer from the band Kiss. Those two gentlemen have their own signature models but they have used been great artist for this company.

This amp is a solid state amp that has four channels. With a host of effects built right into the amp. You get a two channel solid state amp with one clean channel and one distortion channel. Not too much as far as effects go. You have a reverb and that is about it. This is the head version and not much else to it. Hook it up to a speaker cab and you're good to go.

Very easy to dial in. The exact same operation as the combo version as far a control knobs. Everything on the front panel is pretty self explanatory. No need for biasing the amp as there are no tubes in it. Overall this is very simple amp that doesn't need a whole lot of intervention to get it up and running.

This amp sound great on a lower gain setting with a nice Gibson Les Paul or Gibson SG guitars. It fits the rock tone and compliments my playing very well. This amp sounds amazing with a solid classic rock tone that can get anything from the 60's and 70's rock tones. I like the tone especially playing songs from AC/DC or Led Zeppelin. This amp nails those tones without any problem what so ever. Good for doing the chugging type riffing.This amp sound pretty decent for what it is and that is a basic practice amp. You really don't need 80 watts of it as it is not necessarily a gigging amp. Overall this is great amp for anyone who needs a good tone for two channels and who doesn't want to spend a whole lot of money

If you need something with effects built in I would go for the matrix amps. They have the same style of voicing but with more channels and with effects built right into the heads and combos. These amps have long been discontinued. You can find them pretty cheap on the used market. I have seen them as low as $100 at Guitar Center,so I highly recommend picking one up if you need something simple and easy and love the way Hughes and Kettner design their tones and if you can get it at that price.