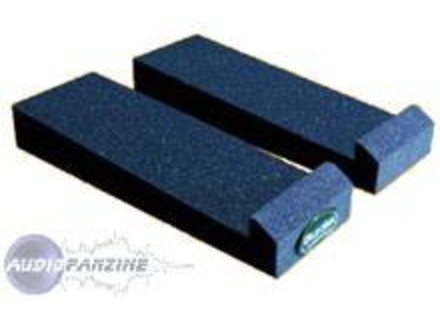 Auralex Mopad
4
Afficher la traduction automatique
Afficher l'avis original
The MoPADs are monitor isolation pads. They’re designed to separate your monitors from the surface they're standing on, they are easy to install, and will improve the sound of your monitors and you will hear what your music really sounds like.

Auralex Mopad
5
Afficher la traduction automatique
Afficher l'avis original
I don't own a set of Auralex Mopads as I currently mix on headphones. However, I made my way over to a friend's home studio (he studies music production) where he owns a pair of KRK Rokit8's. This was before I even understood the concept of proper acoustic treatment for anything at all, so when I saw those brilliant yellow monitors sitting on four pieces of foam, I only had a vague idea of what it was supposed to be for. So he showed me.

He was working on a project that I had come over to listen to. When I asked about the silly pieces of foam his monitors were sitting on, he just had to prove it to me. We listened to his mix (it was a heavy rock mix) originally with the KRK's sitting on the Mopads and I, not understanding the difference, didn't really get what was so special about it.

Then, he removed the Mopads and we listened to it again. WOW. I was blown away at how spoiled the Mopads made me. The mix sounded comparatively terrible! It wasn't that they were actually bad, but the difference was noticeable.

If I recall correctly, his desk was made of a cheap wood, so perhaps this further exacerbated the comparatively poor sound that resulted.

The clear result of using the Mopads was clearly an increase in precision, an unmuddying, and unrattling of the sound. It made the sound a lot more crisp and clean, and it prevented the distracting and metallic rings that plagued the mix without them. If I ever make the switch the using monitors (when I find a permanent room to treat; I'm always moving around), I will certainly invest in the Auralex Mopads!