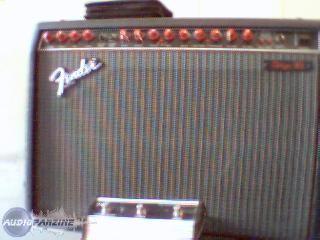 (contenu en anglais)
Afficher la traduction automatique
Afficher l'avis original
150 watts. (Not conservative at all, trust me.) Open back 1x12 with stock “blue” Fender speaker . This is a “red knob” model so my understanding is that it’s considered vintage. Two channels – Clean and Overdrive/Distortion with a “boost option”. Clean has Volume, Treble, Mid, Bass and Mid-cut switch. Overdrive/distortion has Gain, Boost, Treble, Mid, Mid-Boost switch, Bass, Contour with “tilt” switch, presence. The amp also has a master volume and reverb. Two inputs, one for channel switching, one for parallel channel mode. The amp also has switches for channel switching, or you can plug into the footswitch jack (which was included) to switch between channel 1 and 2 as well as to select reverb and/or the boost function. Effects loop and speaker out jack on the back panel of the amp as well.

The controls on the front are many, but it's fairly straightforward, especially if you are familiar with Fender amps. The &quot;presence&quot; and &quot;mid-cut&quot; controls are particularly useful. The only drawback is that I don't understand the purpose of the &quot;tilt&quot; control. I usually put the treble on 9 or 10, the mid on 0 and the bass anywhere from 2 to 9, and get great clean sounds, or great distorted sounds with a pedal. The amp is fairly heavy. As with all Fender amps, this is built like a tank. You could probably drop it from a skyscraper and it would keep on ticking. I did have to get the rear input jacks fixed for $20 about 3 days after receiving the amp from Guitar Center. But hey, it was used.

This thing is LOUD ! I don’t think 150 watts is an overstatement ! If you go anymore than 1, you’ve got band-mates and sound engineers sneering at you! Also great for out-competing your annoying rhythm guitarist in the volume department! Clean channel is the typical “glassy” Fender clean that many of us have come to love. The treble can be a little harsh, but hey, it’s a solid state! Overdrive channel is OK, but no one usually gets a Fender for the overdrive/distortion. (See my comments under “overall rating.”) I use the “boost” function on the distortion channel via foot-switch as it provides a great volume boost for solos !