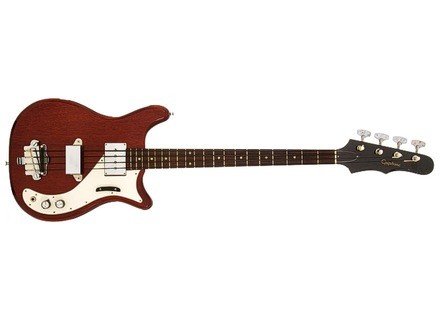 Epiphone Newport EBS
5
Afficher la traduction automatique
Afficher l'avis original
The Epiphone Newport electric bass was made in the 1960's and is essentially Epiphone's version of the Gibson EB0. The bass comes in a few different types, but the one this is a review for is the original and most often seen - the Newport EBS. I don't know where these basses were made, but they have a single humbucker just like it's Gibson counterpart, and is made out of mahogany for the most part with a rosewood fingerboard. The bass has 21 frets and is a standard four string bass guitar.

It's not hard at all to use or play the Epiphone Newport, as it's got a great feel and only a minimal amount of controls. The single pick up has just volume and tone knobs, which is the bare minimum you'll find on any bass. It's also really easy to play as the neck isn't the thick. I've found it easy to navigate and play up and down the neck as I'm really a fan of the playability here. Getting a good sound is easy, as it's only got the single pick up so there's not much room for changing the tone anyway.

The sound of the Epiphone Newport is punchy and round and is great for all kinds of music. I've only used it in the studio as I don't own it. The last studio I worked at before the one I'm currently at had this as an instrument for any client to use, and I've used it on both sides of the glass. It's definitely got a unique sound, but when used in the right situation it can really shine. I haven't used it's Gibson counterpart as much as I have this one, but it's definitely a better sounding instrument, although that's not a knock on the Newport at all...