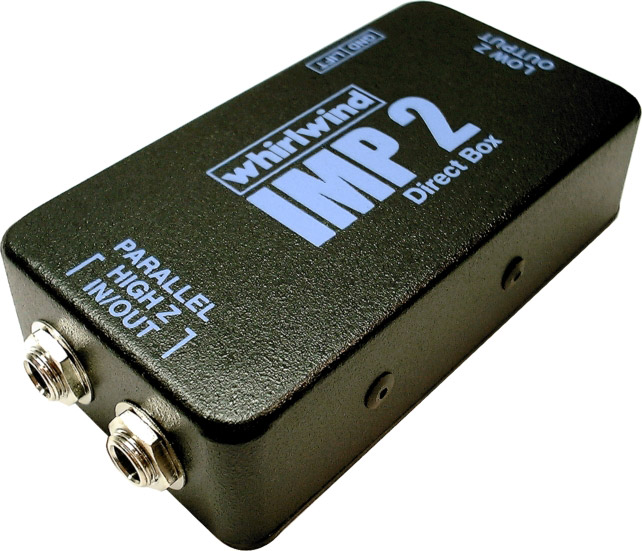 (contenu en anglais)
Afficher la traduction automatique
Afficher l'avis original
The Whirlwind IMP2 is a direct box that has an XLR output and a ground lift switch. The Whirlwind IMP2 is very portable and small, it can fit in the small pocket of a gig bag. It sounds really clear and can take your sound to new levels. The Whirlwind IMP2 is built to last because it is made out of metal and the text on it is a really light blue color that is almost neon so you can read it easily if you are in a dark setting.

There is no set up process involved with the Whirlwind IMP2; it was one of the easiest pieces of gear that I have ever used. It only cost 50 bucks and it is used to take your instrument line in and make it a low impedance balances signal. Any musician or DJ that gigs must have one of these handy because you will never know when you need it. It is a great addition to have to your sound setup especially in a live setting. It works great and has never given us any issues at the club.

The sound is clear, bright and clean.

I wish I would have got this when it first came out. I have only been using it since March of this year. I do not use it a lot because a lot of times I just don’t need it. But when I do need it, it is always there and it works great. The Whirlwind IMP2 only has 1 channel and 1 ¼ input; also 1 XLR output and 1 ¼ thru output. There are other models that have more inputs and outputs but I just needed something small. Whirlwind makes a few of these styles of boxes in all price ranges. But the Whirlwind IMP2 is the best one you can get for the money and the quality.
Le IMP2 Whirlwind est une boîte de direct qui possède une sortie XLR et un interrupteur ground lift. Le IMP2 Whirlwind est très portable et petit, il peut se loger dans la petite poche d'une housse. Il semble très clair et peut prendre votre son à de nouveaux niveaux. Le IMP2 Whirlwind est construit pour durer, car elle est faite de métal et le texte sur c'est une couleur vraiment la lumière bleue qui est presque néon afin que vous puissiez le lire facilement si vous êtes dans un environnement sombre.

(contenu en anglais)
Afficher la traduction automatique
Afficher l'avis original
The Whirlwind IMP2 is a direct input box that has two 1/4 inch inputs and an XLR output.  It is an analog piece of gear and is not rack mountable as it is a stomp box.  There is a switch on the side of the box for grounding, which comes in handy quite often.

The make up of the Whirlwind IMP2 is extremely basic and easy to follow.  Even those with no experience with direct input boxes should be able to figure out how to use it.  It is as easy to use as any other simple direct input box that is out there as it has quite basic connections and features.  Since the set up of the Whirlwind IMP2 is so easy, a manual isn't necessary to have around.

Generally, the Whirlwind IMP2 has a really solid sound.  I mostly use it to record digital keyboards and bass guitar and it works and sounds great for these applications.  It is a very capable DI box and will work for just about anything that you would want to use a direct input for.  It doesn't color the sound at all and definitely depicts and accurate portrayal of the signal you are feeding it.  While there are a few DI boxes that I like better than the Whirlwind IMP2, there aren't that many that I do like better and most of them cost much more than this would.  The Whirlwind IMP2 is a really good sounding DI box overall and don't have too many complaints about the sound quality.

I've been using the Whirlwind IMP2 DI box for about three or four years and it is always a pleasure to use these.  Even though they aren't the best DI boxes in the world, they do the job fine at a very reasonable price.  They are built well and are definitely reliable in make up and structure.  Overall, I would definitley recommend checking out the Whirlwind IMP2 if you are looking for a nice DI box at a great price.