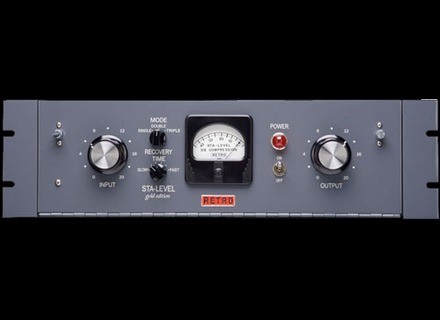 Retro Instruments Sta-Level
5
Afficher la traduction automatique
Afficher l'avis original
The Retro Instruments STA-Level is a tuber limiter, modeled after a limiter of the same name made by Gates in the 1950's. There are some revisions but only for the better as the tone is supposed to be pretty darn close to the original. It's all analog and I believe it has XLR connections but I'm not 100 % sure as it was already hooked up to a patch bay when I've used it. It is rack mountable and looks like it will take up 3 spaces.

The Retro Instruments STA-Level isn't difficult to use once you know what all the parameters at play are. It's got your standard input and output levelers, but also has a recovery time six position parameter and a single/double/triple mode knob. A manual shouldn't be necessary for most users but is probably readily available if needed.

The sound of the Retro Instruments STA-Level is nothing short of fantastic. It's pretty much the perfect limiter for recording vocals and is useful in all sorts of different situations. It's simply a classic tube sound that is rich and undeniably full sounding. It's useful for drums (especially kick drum), vocals, and almost anything where you want to touch your level with a limiter. I can't describe the full sound that you get with this, it's pretty much something that you need to hear for yourself.

It's not going to be cheap to get your hands on a Retro Instruments STA-Level, but you're always going to have to pay for quality, and especially when we're talking about a top tier tube limiter. This is a front end piece for your professional or home studio and can be useful all over the map. Most home studio owners won't be able to afford a piece like this, but if you get one limiter for your studio it's worth it in the long run to get a top end piece like the STA-Level.
Les Instruments Retro Sta-Level est un tubercule limiteur, calqué sur un limiteur du même nom faite par Gates dans les années 1950. Il ya quelques révisions, mais seulement pour le mieux tant que le ton est censé être sacrément proche de l'original. C'est tout analogique et je crois qu'il a des connexions XLR, mais je ne suis pas sûr à 100% comme il a déjà été relié à une baie de brassage quand je l'ai utilisé. Il est montable en rack et il semblerait qu'il va prendre jusqu'à trois espaces.

Retro Instruments Sta-Level
5
Afficher la traduction automatique
Afficher l'avis original
This is a pretty awesome hardware compressor made by Retro Instruments. It is apparently a replica of an older Tube Compressor and is more or less exact as it uses all the same parts and ingredients as the original which was made by Gates who no longer manufacture it. It is a single channel compressor so it has one XLR input which can be hardwired to the patch bay as it is in the studio where I used it. It doesn't have any other connection types. It's 100% tube technology so there are no ways to connect it to a computer except as part of the audio chain through Pro Tools.

Using this compressor is easy. While it doesn't have all the knobs and parameters that other tube compressors do, it's still quite versatile. The main controls are input and output gains, which are pretty self-explanatory. There are some additional features too. There is a mode switch which changes the ration from single, double, or triple. There is also a "recovery" knob which will adjust the release rate. While some of the terms may be different the functions are basically the same as most compressors.

This is a highly flexible compressor despite the apparently limited functions of it. It's a pretty transparent and noiseless compressor which I really like to find in a tube compressor. That doesn't always happen really. The different modes give it a whole lot of different character, going from a light smoothing out compression to a more punchy, intense compression that'll put a vocal or instrument way out front in the mix. The release controls don't seem to be very flexible at first listen but they soon reveal that they are indeed quite flexible after all. This is simply put one of the better sounding compressors out there. While there are going to be times that you need a compressor to be more flexible in terms of what it can do, this one in particular is great just because it has a great tone. It does slightly color the sound but I've yet to hear that in a bad way.