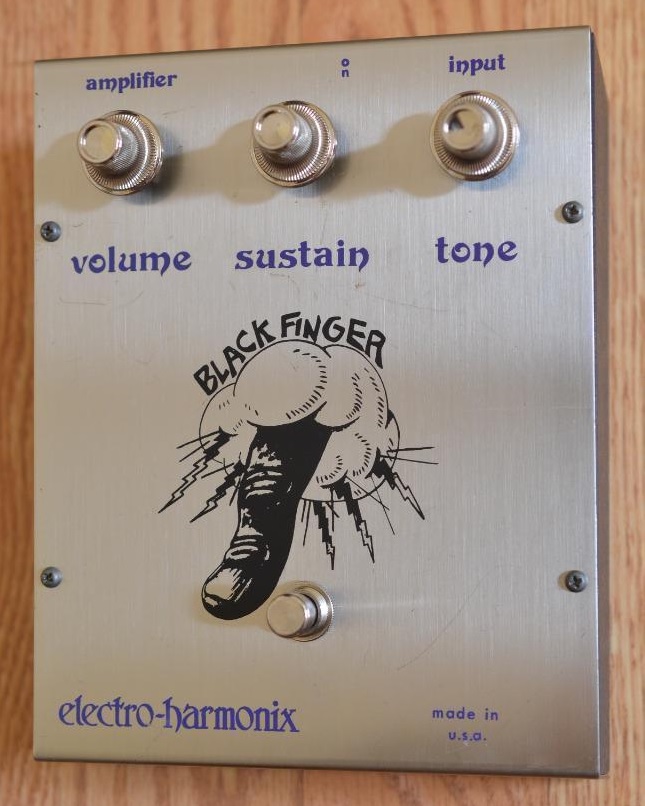 (contenu en anglais)
Afficher la traduction automatique
Afficher l'avis original
This is a pedal compressor for guitars, but I've heard it can be used for basses and keys as well. It is pure tube compression, the same voltage that can be found in highend studio compressors. This unit cannot be edited on a computer and is not MIDI ready, and it is not rackable.

The sound effect editing is pretty easy. It's a little bit more complex than a lesser compressor such as a Boss CS-3, but not quite as much of a bear to use as a rackable studio compressor. It's easier to use live than in the studio, as I prefer to use the multitude of outboard compressors that most studios, including the one I work at, have. However, live this thing is incredible. It offers you as much range and voltage as one of those studio ones would (300V), and it doesn't give you that cheap dynamic-robbing sound that most pedal compressors are known for. In fact, it puts most of those, including my former go-to, to shame. The manual explains the technology and the applications of the pedal pretty well. The two modes, Normal and Squash mode, change the basic shape of the compressed signal, and offer two drastically different sounds even when all the settings are identical. Squash, as the name implies, flattens the sound considerably more than normal mode, which I was apprehensive about at first. I eventually discovered to my surprise that this mode was preferable in certain situations.

I use it mostly with my Strat and Telecaster, and I have also had greater success with acoustic guitars that are amplified. Most often, when I'm playing live, I would naively assume that I could plug my Taylor Acoustic/Electric straight in and start playing. However, the sound that I get would sometimes be particularly harsh, and far too unnaturally bright. I find that this compressor works wonders in smoothing out the acoustic, and actually gives it a sound far closer to its natural acoustic sound than I had previously achieved. With electrics, especially single-coiled pickups, I find that the compressor works great at giving a lead tone more beef and sustain. It actually even works wonders with (gasp!) rhythm tracks, something I've never been satisfied with in a pedal compressor. The vast range of the compressor will allow you to solve your biggest volume/tone problems. It is diverse enough to go from being really transparent in normal mode, to coloring the sound impressively in the higher compression modes.

My only beef with this compressor is a small one, and that is the fact that I can't use it with my EH Big Muff. This is because that pedal already has a ton of compression on it. But that pedal is all about noise and gain anyway, so it's not too big a deal at the end of the day. With a good distortion pedal, the lead tones are out of this world, and they give your playing a beefiness and sustain that will totally boost your confidence as a player. Even with clean lead tones, the effect is great. The main reason it works so well is because it doesn't really sound as though your amp is heavily compressed, which can be painfully obvious with lesser pedals. If you can afford to add it to your arsenal (it averages about $190 online), it's well worth it, especially if you are frustrated with your current compressor or don't have a compression pedal at all. For the live guitarist, it's a very valuable and reliable tool. Just be careful not to break those tubes!
Ceci est un compresseur de pédale pour guitare, mais j'ai entendu dire qu'il peut être utilisé pour les basses et les touches aussi. Elle est la compression du tube pur, la même tension que l'on trouve dans les Highend compresseurs studio. Cette unité ne peut être édité sur un ordinateur et n'est pas prête MIDI, et il n'est pas rackable.