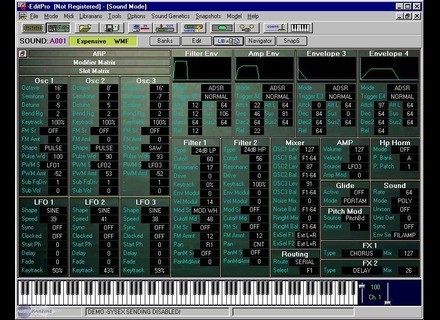 Soundtower Waldorf Q Editor
3
Afficher la traduction automatique
Afficher l'avis original
Soundtower Waldorf Q editor has recently been upgraded to 5.0 to get rid of all of the bug problems when using it on a newer Windows system. The Waldorf Q comes with a huge sound back that is available right at the click of the mouse, even has some good but simple effects that you can edit and use in real time with no lag (now that it has been updated). The new feature to organize your sounds in Sound Tower Waldorf Q is could the “sound Librarian” it makes it very easy to organize everything and have it all in sub categorize or in folders to find easy later on. Setting up Waldorf Q was very easy, there where no issues once the upgrade was released but before the upgrade was released there where a lot of issues. Way too many issues to name.

The software with the 5.0 update works great in its configuration. Waldorf Q is now very stable and works great, there where a lot of bad reviews on it before the update came out but since then I have read nothing but positive stuff about it.

The Multi Mixer that is built in is a very good mixer, it was actually a surprise because if I remember correctly it wasn’t this good in the original version before the update. It is a 16 channel mixer ( though I wish it did have more channels but 16 is better than 8). A new function of it is also called “sound Genetics” and it’s the ability to edit and change sounds. Its pretty creative what they came up with though, the 5.0 version was a complete turn around from the original . After the original started not acting right, I put this software away for good. Then the update came out and its very good now and a lot more complex. But if you want something more in depth , I wouldn’t purchase this.