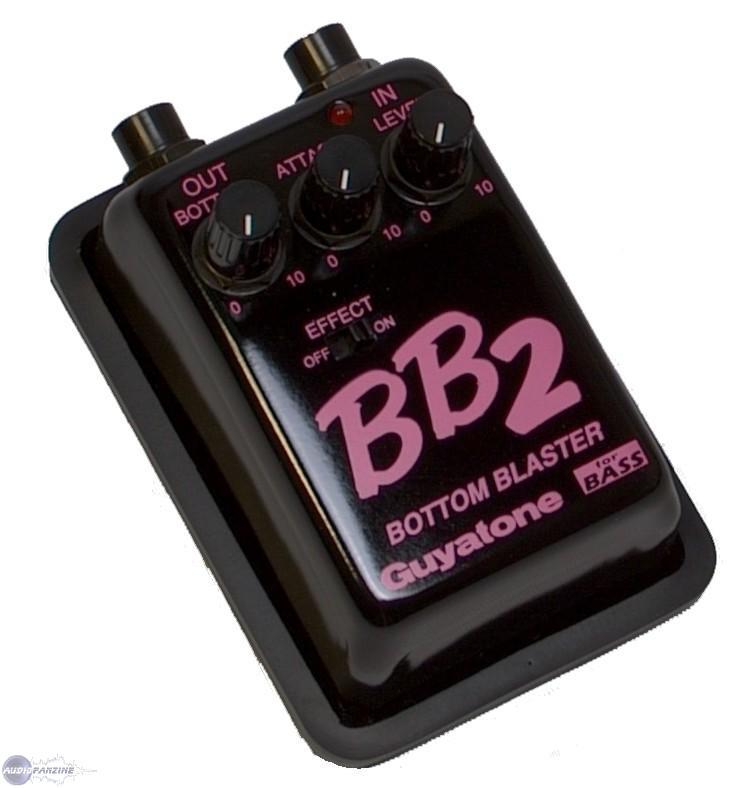 (contenu en anglais)
Afficher la traduction automatique
Afficher l'avis original
This is an EQ specifically designed for bass, and the intent is to fix problems that the bass might have with certain high or low frequencies. There are only the 1/4" input and output as well as the adapter input for power. There is no computer editing capabilities, nor are there MIDI capabilities, as this is simply an analog pedal. This is not rackable either.

There are only three knobs on this effect box, as well as a switch for turning the effect on or off. I think this is interesting, as the switch is a hand switch as opposed to footswitch. I was puzzled by this at first, but eventually I realized that this is an effect that one would leave on or off, and wouldn't be changing mid-song. Then it made more sense. There are three knobs, bottom, attack, and level. The bottom knob will add the aforementioned low frequencies to the bass sound. The attack knob will adjust and increase the mid and high end of the sound for clarity's sake. The level knob adjusts the level up or down, actually capable of adding 30 db of boost according to the manual. The manual is easy to read and lets you know exactly what to do.

I have used this with my Jazz bass, as it doesn't always have the huge low end that I want. It also helps to use with a PA system when going direct, but it does work just as well with an amplifier. I think that this pedal will certainly color the tone of just about any bass, but that's sort of the point. The point is to achieve a massive low end that the audience will feel in their chest, and that is certainly possible with this pedal. Even though I wouldn't use it for most of my genres of music, I think it's an interesting and effective pedal that has many creative uses, especially today with the numerous genres that rely on heavy low end. The attack knob also allows you to add a clarity to the sound that can sometimes be lacking in a bass rig. I like getting crazy low end on my bass and doing hip-hop songs with my drummer.

I think that the effect is pretty cool. It's not the most versatile EQ, it's more of an EQ-enhancing effect. The price isn't too bad retail, and I got it from an acquaintance for a really great price. I didn't really try anything like this before, other EQs I've used were not very similar to this one. I would recommend this to somebody who is either frustrated with their current rig and thinks they only need minimal adjustment, or somebody who is interested in pushing the limits of low end.
Ceci est un égaliseur spécialement conçu pour la basse, et l'intention est de régler les problèmes que la basse peut avoir avec certaines fréquences hautes ou basses. Il ya seulement le 1 / 4 "d'entrée et de sortie ainsi que l'adaptateur d'entrée pour le pouvoir. Il n'ya pas de possibilités d'édition informatique, ni de capacités MIDI, comme cela est simplement une pédale analogique. Ce n'est pas rackable soit.