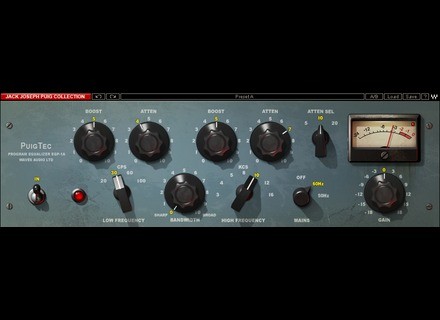 Waves PuigTec EQP-1A
4
Afficher la traduction automatique
Afficher l'avis original
This Waves plugin is pretty famous as it's modeled after the Pultec EQP-1A. That's been a very famous EQ that was used on records from Black Crowes, Weezer, Panic at the Disco and more. It's unique in that it can boost and cut the same frequency at the same time, so you can get all kinds of cool EQ curves going on. This plugin models that very EQ that was made so famous throughout the years. There are quite a few knobs on this, but they're all fairly straight forward as to what they do. You select a low or high frequency, and then you turn the dials to boost/cut it. There's also a bandwidth knob which adjusts the "Q" control of the EQ curve. This makes it sharper or broader across the EQ spectrum. Finally, there's a gain and attenuation knob you can adjust to fine tune everything.

Waves plugins are some of my favorite out there. First of all, they're cross platform, and as a Mac user, that's a huge plus for me. The plugins are always rock solid, too. They perform amazingly well, take up very little memory and play nicely in Logic. While they're 32 bit, Logic applies a bridge that allows you to use them in 64 bit environments. This way, you get the best of both worlds -- you can use these 32 bit plugins, but you can still access all the precious memory that the 64 bit environment needs. I never read any of the manuals, so I can't comment on that.

Waves PuigTec EQP-1A
5
Afficher la traduction automatique
Afficher l'avis original
The Waves Ltd. PuigTec EQP-1A is an equalizer plug-in that's designed by Jack Joseph Puig and Waves, and of course modeled after the legendary Pultec EQP-1A Program EQ. I don't believe that the plug-in is available outside of buying a full bundle, with the JJP Analog Legends bundle being it's origin. It's also available in a number of other larger bundles from Waves. You'll install it along with whatever bundle you get it in, which shouldn't be a hard process in the least. Using the plug-in should be even simpler, even if you aren't familiar with the Pultec make up. It's about as simple a make up as you'll find in an EQ, and is one that has been copied by countless plug-ins and outboard EQ's. It consists of two bands, each with parameters for boost and attenuation, a well as a certain number of fixed frequencies to choose from on each. It also has a bandwidth parameter for setting how wide or small you want the Q to be, as well as an overall gain parameter which isn't something found on the original Pultec...

Right now I've got the Waves Ltd. PuigTec EQP-1A running on my system at home, although it's not the only place I've used it. My home studio is Pro Tools HD 9, which I run on a Mac Book Pro laptop consisting of a 2.2 Ghz Intel Core 2 Duo processor and 4 GB of RAM. I run Pro Tools with a Digi 002R audio interface and monitor with a set of ADAM A7's. I've also used this plug-in on our systems at the studio where I work, which are all Pro Tools HD based. I can't say that I've ever had a problem running this plug-in on either system, as both have been adequate enough to run it smoothly.