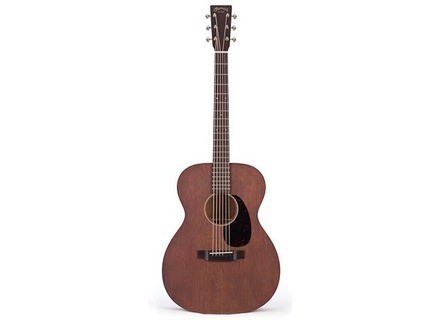 Martin & Co 000-15M
5
Afficher la traduction automatique
Afficher l'avis original
Martin's new line of 15M guitars is really a fantastic value. They currently made three sizes, the 0015M, the 00015M and the D15M. Though I ultimately purchased the 0015M, I have had experience with all three models. They feature SOLID mahogany bodes (top, back, sides and the neck), a rosewood fretboard and bridge, bone nut and saddle, open back Waverly style tuners, and ebony bridge pins. There's no pickups on board, so I may install an undersaddle unit in mine. It's very spartan as far as cosmetics go, and features a thin satin finish that shows off the mahogany grain and allows the sound to really cut through so well that it's almost shocking for such a small and "cheap" guitar.

There isn't much to say about this guitar because it's so simple. It's very light in weight and is easy to hold. I bought the 0015M so it fits my smaller frame quite well. There is no cutaways so upper fret access is not great, but since it is an acoustic guitar I'm not too worried about that. What's important is that it feels and sounds exactly how I want it to and that's ultimately what sold me on purchasing the 00015M's smaller sibling, the 0015M.

Now, I'm not really an acoustic player, but I know good tone when I hear it. This little guitar has TONE in spades. It is warm and full in the bass register with strong mids and a nice round top end. Harmonics just spring from all over the fretboard and the sheer volume that it produces is shocking enough that I refer to it as a "tiny cannon." I played it for about ten minutes when I first picked it up in the store just to get a feel for it, and then I decided to try tuning it to open D tuning. Doing this brought the little thing to LIFE. I cannot describe the feeling I had without sounding like a walking advertisement for Martin, but for those of you that own one, you know what I mean. I must have played for about a half hour before my father arrived at the store. At first he kind of shook his head when I showed it to him and said I needed to buy it. However, his tune was changed when I played a few chords. I spent all that evening researching it and realized that it was all solid woods, had a bone nut and saddle, and the vintage style "butterbean" tuners. The next day I decided to call the store and tell them to put it on hold for me while I made a final decision. On Friday I decided to go in and make sure it was the one before signing the finance papers. I tried some Robert Johnson type tunes as well as some Django esque gypsy jazz and a few other things... all with stunning results. Just an amazing guitar.

All in all I am RIDICULOUSLY impressed with the new 15M series from Martin. They offer great value for money and are laden with only the best features. Cosmetics are exchanged for TONE, and it shows. These guitars come in at about $1,100 new and let me say it's well worth it. They are equipped with a beautiful plush lined Martin case from the factory as well, which is great.