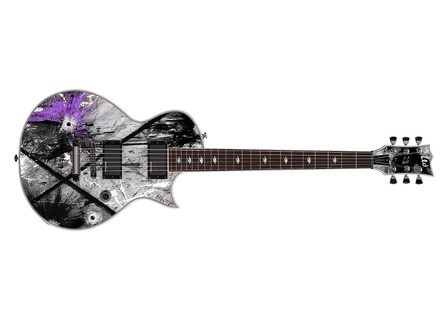 LTD GUS-600EC
5
Afficher la traduction automatique
Afficher l'avis original
Gus G has been doing it beg recently. Now that he has joined Ozzy it seems every week there is a new piece of Gus G hardware. This is the other Gus G signature ESP. The main one that everyone knows is his ESP Gus G. NT with the old school star body shape. This is his other signature based on an ESP EC. I havent seen him play this one but I think it has something to do with him replacing Zakk in Ozzy. It has the LP shape with a graphic that reminds me of one of Zakks guitars from the 80s. The construction isnt too different either. This guitar has a mahogany body with a set maple neck. The neck has a rosewood fretboard with 22 frets and flame inlays. The neck sale is 25.5 which is kind of different for a singlecut. Up top there are locking tuners and the bridge is a locking tune-o-matic from Tonepros. The pickups are a set of Seymour Duncan Blackouts. Gus G has a set of his own Blackouts now but this guitar was made before that. The controls are super simple with a volume knob and a kill switch to help you save the battery life.

This is a very shreddy singlecut. The 25.5 inch scale means you got all the room on the fretboard that you would ever want. You have lots of space up on the high frets just like as if you were playing your super strat. ESP gets it right when it comes with guitars with upgrades from the factory. These guitars are really gig ready. You get locking tuners up on the headstock and a locking bridge down at the bottom. The locking bridge is great and makes maintenence a breeze. The neck join is nicely beveled out so there isnt an abrupt square when you get to the body. It is nice and rounded away. One thing I dont like is that you need a screw driver to access the battery compartment. It seems some ESP's come with flip out battery compartments and some have screw in ones. I wish they all had flip out ones. With the screw in ones you are not saving any time over just having the battery in the control cavity. With a flip out one you can change the battery in seconds without and tools.

The Blackouts in this guitar are nice. Its nice to have an ESP that doesnt have the same old 81/85 setup in it. The Blackouts are Seymour Duncans active pickups. They are similar to EMG's but different enough. To my ears they are good at some of the things EMG's are bad at and also bad at some of the same things. The low end on these pickups is massive. A lot more low end than you normally get with EMG's. Some people may like this some may not. Normally it is hard to make EMG's sound muddy but with all the low end on these Blackouts they can sound muddy at times. They do not have as much of the high end fizz that EMG's have so they are a bit more natural sounding but they still sound like active. They have good clarity for the most part even with all the crazy low end they have packed into them.