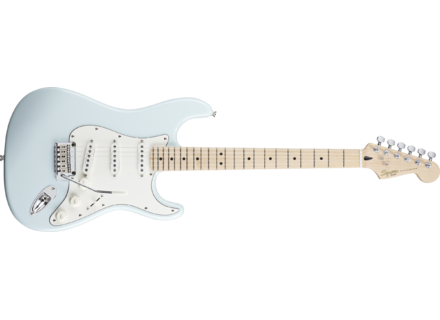 Squier Deluxe Stratocaster
3
Afficher la traduction automatique
Afficher l'avis original
The Squier Deluxe Stratocaster is a more recent model that was their attempt at a Strat that was both vintage and modern. At first glance it looks a lot like the American Standard model made by Fender and indeed it shares many features with that guitar. It features an alder body, maple neck with 22 frets, sealed chrome tuners, a 2 point tremolo similar to the US Fender design, and a trio of Duncan Designed single coil pickups wired to typical Strat electronics. It's pretty typical, but it does have a cool look to it that prompted me to grab one and put it through its paces...

The design of this guitar is pretty typical Strat, and thus it is a medium weight instrument. The contouring is pretty reasonable on this guitar and it does feel pretty solid. The neck has a nice satin finish and a nice profile that's not too thick, nor too thin. Unfortunately this guitar was marred by sharp fret ends and a poor setup overall... bearing in mind this was a brand new guitar, not a shopworn model. Unfortunately Squier hasn't quite figured out their standard line of guitars quite as well as some others yet. Upper fret access is basically akin to a standard Strat, no real surprises there.

Getting a good sound out of this guitar is a bit more difficult. Try as I might I can't get into the DD pickups in this guitar. They're not bad, but there's nothing remarkable about them that stood out tonally for me... they were a disappointment considering I do like Duncan single coils quite a bit.

This guitar doesn't seem to have a stylistic preference. Played through a clean amp like a Fender or VOX, the tones were jangly and bright. The high end could get brittle quickly though, and I found myself wanting more midrange out of the guitar that just wasn't there. It tended to sound better on the neck pickup for bluesy tones where it wasn't as bright. Switching to a drive sound left me kinda perplexed. The tones were decent at their core for classic rock or even some shred type things, but there was just too much high end to be enjoyable. The brittle nature that I noticed in the cleans was there too with the drive, but it was harder to dial out. Unfortunately it pretty much killed my enthusiasm for the guitar and led me to seek out other options for an affordable Strat.