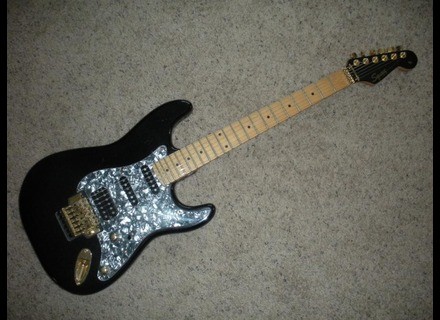 Squier Pro Tone Fat Strat
4
Afficher la traduction automatique
Afficher l'avis original
The Squier Pro Tone Fat strat was made in korea. It's a 22 fret, standard scale strat. It has a floyd rose licensed tremolo bridge. There are 2 single coil pickups in the middle and neck position, and a humbucker in the bridge position, all of which are controlled by a 5-way pickup switch and a volume and tone knob. The maple neck is very smooth and playable. It is, perhaps, my favorite feature of the guitar.

The maple neck has a nice feel, and, of course, being a strat, you dont have to stretch too much to reach the high notes. It's pretty heavy for a strat, but I suppose you can thank the floyd rose vibrato system for that. I'm not too happy with the electronics and I think I need to upgrade it.

The humbucker is very heavy, so it's really nice for a powerful, dirty sound. I've used it on tube and solid-state amps. The neck is so smooth, but the floyd rose is not for the simple-minded. Ive had it for 8 years, and Ive never had it professionally set up, which will most probably make the guitar shine. It has detonation issues once you move up the 5-way switch, so the neck pick-up is rather noisy. Im sure this is due to a mechanical issue onset by a user, not the factory.

After 8 years, It remains the favorite guitar of my bassist. I guess because it's low and dirty. I love the color scheme, it's like a fender deluxe. No one I know has a pro tone fat strat, or even a pro tone series squire, so it's pretty cool having one. It is definitely a head turner, but, unfortunately, people often only see it as just another squier. I had initially wanted a fender standard strat, but when I saw this guitar which was quite an eye- catcher, I decided I could settle with it. I do believe I made the right decision, because it was cheaper and just as reliable. I would have made the same choice if I had the chance. Fender doesnt like to disappoint...