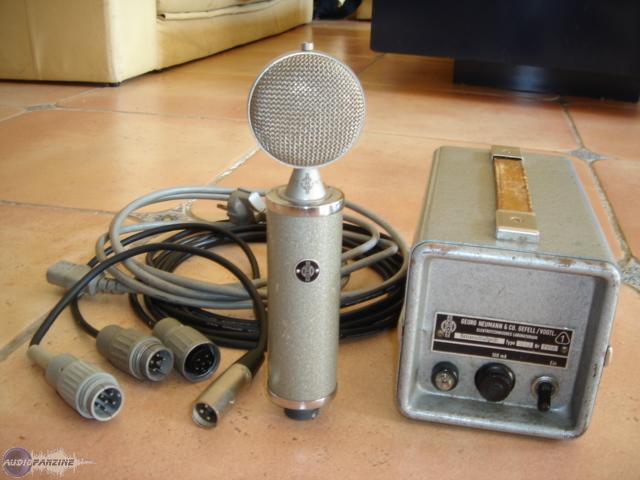 (contenu en anglais)
Afficher la traduction automatique
Afficher l'avis original
The Neumann CMV 551 is a bottle neck tube condenser microphone that is quite unique.  Since it is indeed a tube condenser mic it comes with its own power supply and cable.  I've only used this mic for recording and it is strictly designed for use in the recording studio.

I've only used the Neumann CMV 551 two or three times for recording vocals in a local professional studio and even in this limited use I was incredibly impressed.  This is a very unique microphone because it is one of the only bottle neck microphones that Neumann has made throughout the years and at the same time is a tube condenser mic.  As far as recording vocals with this mic, it really sounds great - especially for female vocals, but for male and female alike.  It has a really crisp high end while at the same time has full and warm sound that ranges across the frequency spectrum.  While I've only used the Neumann CMV 551 for recording vocals, it is absolutely capable of recording just about any type of instrument that you would want to use a tube condenser mic because it is quite a well rounded mic.  Beyond the incredible sound quality of this mic, it has a really awesome look to it that no doubt will impress whoever is using it!  It also has the Neumann seal so you can rely on it to be built well and to work as long as you treat it properly.  You can also rely on it to have a huge price tag because it is indeed a Neumann and is a vintage one at that.  While I can't say I would recommend going out and getting one of these to everyone because of the rarity and steep price, I can say that if you are ever at a studio that has one, you should definitely take advantage!