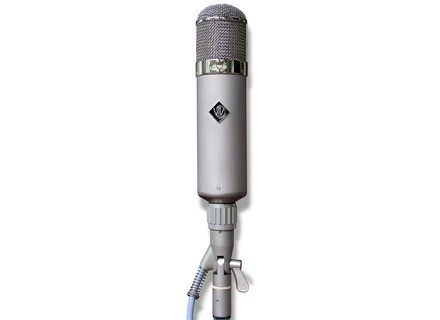 Wunder Audio CM7
5
Afficher la traduction automatique
Afficher l'avis original
The Wunder Audio CM7 Micrphone is a very expensive mic. You probably wont be able to afford to get this for your home studio so you will need to push for your local studio to get this unless you have a great budget and can afford it. But most local studios that have been operating for a while have this on hand.
It comes with the Mic in a oak box and a shock mount.

You wont be able to appreciate the Wunder Audio CM7 untill you get a chance to record with it. Talk about getting a good quality, it really wont get much better than this and that’s why it is a mic that everyone knows about and everyone wants. The issue is can you afford it, its just too expensive to me. But it will take are of all of your vocal needs. It will give you a very clean and natural sounding vocal that wont need to have too man eq cut offs because its so on point with every type of voice that it records. To me it performs better with a middle tone voice. Not too high and not too low. But this mic is perfect and I wish that I could have it for my home recordings but I guess I will have to save up a lot of money in order to get it. There really isn’t anything negative you can say about this mic. Let this mic do the magic for your vocals and stop having to cut so many frequencies with cheaper mics if you can. However there are some other mics that are made by other companies that have the same specs as this mic that are a lot more affordable. I really cant say if they have the same sound or not because I haven’t tried most of them or had a chance to compare them.

Wunder Audio CM7
5
Afficher la traduction automatique
Afficher l'avis original
The Wunder Audio CM7 is a tube condenser microphone that is basically a copy of a Neumann U47. It isn't just inspired by it, it's literally a piece by piece replica. It's actually a replica of the earliest U47's, which are the most sought after ones because they feature a different transformer, which is in the CM7. The CM7 has two possible pick up patterns - either cardioid or omnidirectional. It picks up frequencies between 20 Hz and 20 kHz as well, which is the full range of human hearing. It also comes with it's own shock mount, power supply, cable, and wood carrying case.

While I've never had the opportunity to try out a Neumann U47 and a Wunder Audio CM7 side by side, I can say that the CM7 is a phenomenal microphone regardless of what it is trying to live up to. It has a really pure tone, with a really rich and thick lower end that you'll get with tube microphones of this caliber. I've only used it for recording male vocalists, but for this application it really shines. The vocals come in thick and smooth, and it sounds like the person is singing right into your ear. I don't know too much about the technical aspects of the CM7 when compared to the U47 beyond what I've already mentioned, but from what I've been told the mic is pretty much an exact clone of a very hard to find U47 microphone. Of course with such a high quality is going to come a high price, but the CM7 is certainly nowhere near as expensive as a U47 in general, let a lone an original U47. If you are a professional engineer or studio owner looking for that go to, all purpose, tube microphone, you simply can't go wrong with the CM7. You can certainly spend more if you'd like, but why do so when you can have the CM7! Just a really stellar microphone in every way...
L'audio Wunder CM7 est un microphone à condensateur tube qui est essentiellement une copie d'un Neumann U47. Ce n'est pas seulement inspirée par elle, c'est littéralement un morceau par morceau réplique. C'est en fait une réplique des premiers U47, qui sont les plus recherchés après les parce qu'ils disposent d'un transformateur de différent, qui est dans le CM7. La CM7 a deux possibles ramasser les modèles - soit cardioïde ou omni. Il capte les fréquences comprises entre 20 Hz et 20 kHz ainsi, qui est la gamme de l'audition humaine. Il est également livré avec sa suspension élastique propres, alimentation, câble et étui en bois transportant.