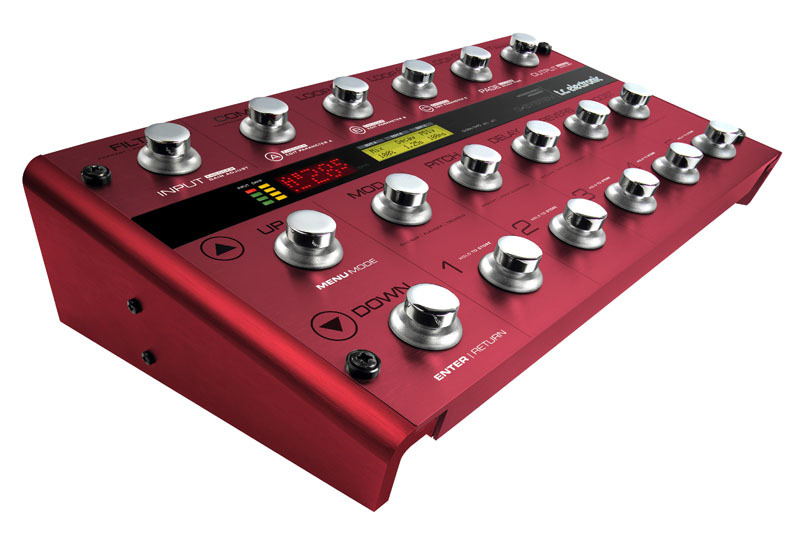 (contenu en anglais)
Afficher la traduction automatique
Afficher l'avis original
First of all, this is not a multiFX board for the beginner, but more for the guitarist, who has found his or her sound, but wants to adress the issue of tapdancing on a stompbox pedalboard.

It must be said though, that this is some really high quality effects, you buy with this multiFX board. It contains all of the effects you might need in a normal situation (filters, modulation, delay, reverb, compressor, gate, EQ and a tuner), but no ovedrive/distortion effects since these has been notoriously difficult to create digitally and in general sound rather cheap. Most guitarists also have their own unique sound, when it comes to overdrive and distortion effects.

Each category of effect has its own button on the board, which makes it really easy to find the effect you need and also makes it easy to get an overview of what you actually have turned on in a preset.

The G-system utilizes a combination of TS (unbalanced) and TRS (balanced) 1/4" Jack connections, which also provides several ways to hook up the G-system to your amp. You have a choice of running all the effects in front of the pre-amp, some effects after the pre-amp or in a four cable method, where the G-system automatically runs post pre-amp effects (e.g delay and reverb) in the loop.
It would take to long to describe how it all is connected in a review, so head on over to Youtube and do a search on the four cable method - there are lots of videos out there.

Even though the G-system has a MIDI connection option, it can only transmit on a single channel. This is kind of a downside, but at the same time it should not be necessary to run with external devices, as almost every kind of effect is present.

Since the board does not have any overdrive or distortion effects, you need to hook it up with those effects. The board comes with four loops that you can plug you own favorite pedals into. Three of them are switchable from the board and the forth has the be programmed in.

The G-system is a combination of analog and digital effects, and therefore have multiple analog to digital conversions in the signal chain. It is rackable, so that you can have the effect brain near your amp, and only the control board up front.

Third party software is available to do editing (both MAC and PC), but is not supported by TC Electronic.

In general, it's easy to edit and program presets. It takes a little getting used to, but once you get the basics down, you should have no problem creating your own presets.

You can go really creative with your presets and hook up expression pedals assigned to different parameters, even the same expression pedal to several parameters at once. But this is a little more advanced and takes a bit of reading in the manual and "The White Paper" from the TC user to user forum.

As mentioned earlier, you can hook it up straight to you amp, so setup is really simple. But you can also go the opposite way, and do the four cable method.

You need to be able to edit your effects using either numbers or close your eyes and listen. Unlike traditional stompbox pedals, where you just turn a knob until it sounds right - that's not possible with a multiFX board. So keep that in mind.

Sound quality is nothing short of perfect! Considering that it is a combination of analog and digital effects. When you have setup the board so that the input and output volumes are as close as possible to each other, then you can't hear it's there. All effects bypassed and it sounds like you plug it straight into the amp.

My favorite effect must be the tape delay and the detune pitch, which behaves somewhat like a static chorus effect.

Everything is crisp and clear with this unit. But why would you expect anything less then that, when it is produced by TC Electronic and has a price tag like it does?!

A great multiFX board for the semi-pro and pro guitarist, who plays music for a living. I would certainly not recommend it for the bedroom guitarist, who's looking for a new set of effects.
If mine got stolen or broke down, then I would get a new one for sure.