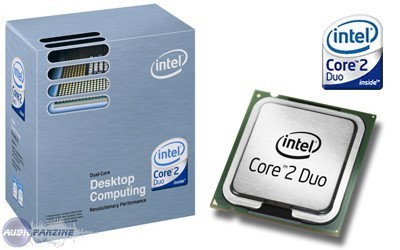 (contenu en anglais)
Afficher la traduction automatique
Afficher l'avis original
This chip is god-like. Go to any computer store and ask for the most frequently bought and overclocked chip they have in the dual-core range, and they'll slip you the E8400. I wasn't hip to the C2D before I had one of these, and they've made me love Intel. An AMD X2 couldn't handle the speed of the E8400, which is at a seemingly modest 3.00 GHz, but it certainly doesn't run that way. It runs cool and swiftly, and it doesn't even bottleneck my GPU. One thing I have to criticize Intel on, however, was the cooler.

The problem I had with the cooler is that Intel uses a bizarre and proprietary bolt on system that doesn't work, Mainly, you have to punch the cooler into the board and turn some knobs, neither of which work, and will increase the work you have to do tenfold. I spend hours trying to get it to work until I realized that it would be smart to get what's called a bolt-thru kit. Basically, what's shipped with a bolt-thru kit is an adhesive-backed stabilizer on the back of the motherboard, which facilitates the need to remove the motherboard from the computer. This may seem like useless information, but a chip that's not properly cooled is a chip that's going to burn out. The other side of the bolt-thru kit is simply screws that will hold the cooler up and directly against the chip rather than falling off and flopping around due to the silly Intel cooler system. I would recommend getting a bolt-thru kit at the same time as the chip, and because the chip is so good, you should treat it well.

Finally, the uses of this chip are endless. While it may not be the fastest at processing Photoshop CS4, or any of the newest Creative Suite programs, Vegas Pro, or Pro Tools, it's still the premier processor in the dual-core non-extreme category.