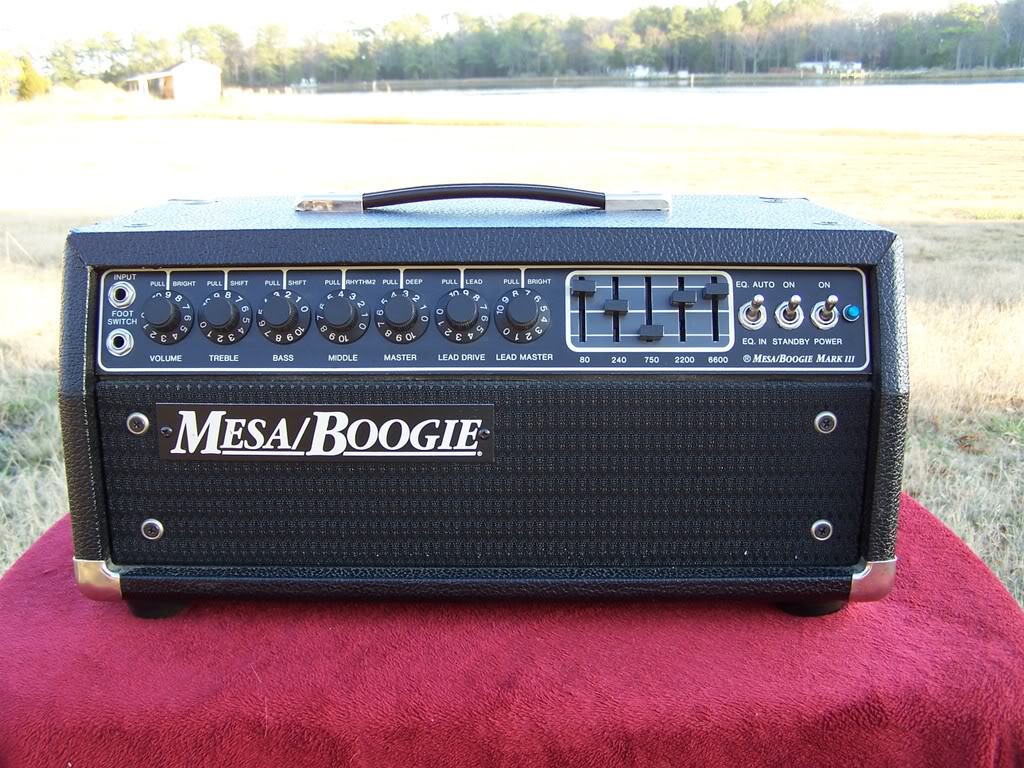 (contenu en anglais)
Afficher la traduction automatique
Afficher l'avis original
The Mesa Boogie Mark iii a mysterious amp to most. The lack of coverage on this model as compared to the rest of the Mark series amps has led many to pass on them despite being quite versatile. The Mark iii features three channels-- clean, rhythm 2, and lead. The channels share a global EQ stack but separate master volumes and gain controls. A decent amount of space is saved on the front panel by incorporating several push/pull functions to the dials. The amp features two individual bright switches, a deep switch, two shift controls, and the ability to toggle the channels via push/pull as well. A graphic eq is standard fare on most Mark series amps and is not left out here. Around back you have a direct out with level control, effects loop, reverb and presence controls, as well as a toggle for the simul-class power section. The look of the amp is very classic, the wicker grill on select models being a real eye-catcher.

The options for tone shaping on this amp are incredible for such a small package. Between the simul class control, the graphic EQ, and the myriad of push/pull functions, it is very easy to forget that this amp is so inexpensive. The Mark iii maintains excellent clarity at high volumes and is easier to dial than the mark V that I also owned. Build quality is splendid, I could see myself gigging with this amp without hesitation.

I played through the Mark iii with a Gibson Les Paul Traditional. Mesa 2x12 cab. No pedals.

The clean channel is alot like the mark i that I've tested. Very round and bottom heavy. This channel would suit players with tele guitars well, being able to tame the inherent trebles in such a guitar. It was somewhat dark with the Les paul but livened up with the bright switch engaged. Rhythm 2 was my least favorite, but was still a better sounding crunch than on other designs in the price point. Winding up the volume with the lead channel gave great results. The presence control around the back of the amp helped dial in the amount of aggressiveness I wanted. I was able to get both mellow lead tones and aggressive power chording with minor adjustments. The onboard reverb is plenty useable as well.

(contenu en anglais)
Afficher la traduction automatique
Afficher l'avis original
I've been dying for a Mesa Mark III for about 6 years now. Been close to having one but having sellers back out, want too much for the condition, and not having funds held me back many times. I sold a few things so had spare cash so I finally decided to buy one of these. $650, 1989 Blue stripe, fully loaded with graphic EQ, reverb, simul class, custom tolex, and fully functional condition. No scratchy pots or sliders or anything. The amp says it's 100 watts and 60 watts in half power mode but all over the internet I'm seeing 85 watts, 75 watts and a few others. 3 channels, rhythm one (clean), rhythm two (crunch), lead (high gain).

Mesa's are well known for not being easy to dial in a good tone. To some that's a problem and makes them look elsewhere. To me it says it's a picky amp and wants to sound good, if you can't set it up it won't sound good. But once you find the right settings it's amazing. The manual is great, explains each control in depth and gives recommended settings after each. The only downside is all 3 channels share the same EQ controls so for some people it's hard to get a nice clean, rhythm 2, and lead tone that's footswitchable. I happen to like all 3 channels with the same settings so it works for me, but it being a downside to most people is the only reason I gave it a 9 instead of 10.

This of course is the best part. After 6 years of dreaming, watching countless videos, audio clips, pics... I finally got to experience the amp for myself. I bought it sight unseen without ever hearing one in person before. I was certain it was exactly what I wanted and I was totally right. It's common for people wanting Early MetallicA and Dream theatre tone to buy Mark III's as a cheaper alternative to the coveted Mesa mark IIC+. They're well known as the holy grail of mesa amps, and many amps all together. I didn't buy one to try and copy MetallicA. Although it nails the Master of Puppets and And Justice For All tone it can do so much more. It's the tightest amp I've ever played. Even with the gain cranked to 10 it's still articulate and smooth sounding. Many high gain amps have more gain than you could ever use and once it gets past a certain level it turns to mush. Not with this, I don't have the gain dimed but it's nice to know if I did I can still get very nice not mushy tone.
This amp is the most aggressive mesa ever made, it's like a chainsaw, cuts and rips but also has a gracefulness to it. It's like the lead channel has 2 modes, and it switches automatically. Of course it doesn't really, but it seems like it. On rhythms it's very heavy, crushing, and aggressive. Very thick and stands out, you can't NOT listen to this amp. But when you play leads it smooths out and gets very creamy. Santana was known for using Mesa Mark amps and he has some of the bluesiest leads ever. The reaction between the guitar and the amp is just amazing.
The cleans are very sparkly, almost fender-ish. The best example is MetallicA's cleans. They used a mix of the Mesa and a Roland JC120, but this can nail it perfectly. Listen to the song "One", intro to "And Justice For All", and intro to "Enter Sandman".
Another great thing is this has a 3rd channel, the Mesa Mark III was the first 3 channel amp. In between the rhythm 1 (clean) and the lead channel, rhythm 2 has more of a crunch to it. It's the biggest complaint by people but personally I like it quite a bit. It's by no means a high gain channel so it's not good for metal but for blues and classic rock it's great. Or put a boost in front of it and basically get a second, but different sounding, lead channel.