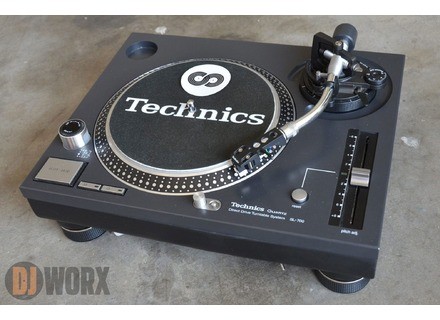 The Tools or War Crotona Park Jams are a wall to wall Hip Hop legend-fest of epic proportions. And being something of a record collector, Biz Markie is a regular at these events. But this year, it wasn’t so much his ridiculous collection of rarities that caught people’s eyes, but the turntables he played them on. No, it’s not Photoshop — those really are 7″ Technics decks. Allow me to explain. Some Background Knowledge

There’s a bit of a back story to this that started around 8 years ago. I was sent the above image from a reputable source purporting to be a 7″ Technics deck. It doesn’t take much CSI forensics to see that it’s a mock up, but apparently came via a Technics rep. A month or so later, I happened to find myself upon the Technics stand at Musikmesse, and figured it was the idea time to get some verification from the horse’s mouth as it were.

I found a guy who looked high up the corporate food chain, whipped out my laptop and asked him if this image was real. The look on his face was as if I’d pulled out the secret area 51 files, resulting in a very serious “where did you get this?”, which at the time made me think that there might be something in it. Seems there might have been after all.

Fast forward 8 years, past the demise of the entire Technics turnable line to yesterday. My Facebook timeline was and still is littered with the same handful of images of Biz Markie using what are dubbed as the SL-700 turntables to rock his extensive collection of 45 rarities. But there does appear to be a developing story, one that involves our old friends at Stokyo and former Technics engineers. I’ve been given scant detail about the full story, but rather than feed you tidbits, I’d rather give you a full story in due course. But needless to say we’re in the loop and hope to bring you updates if and when this story develops.

I’m hopeful that this is a developing product. I don’t know if Panasonic would be officially involved, or if it would be a very strictly limited  and expensive boutique edition. One thing is for sure — DJs and hipsters alike would be all over these if they ever did see the light of day.

It’s really nice to see them turn from Photoshop to reality. But what do you think? Do you like them? And importantly, what’s the maximum you’d pay for them if they ever did make it to production? Would you invest in a pro for a smaller DVS setup? Let us know below.