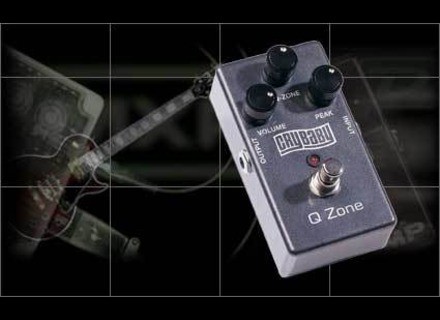 Dunlop Cry Baby Q-zone
4
Afficher la traduction automatique
Afficher l'avis original
Wah pedals have become a staple of the guitar world. Look at any guitarist's pedalboard, and there's a 99% chance that guitarist will have a wah pedal there. Some guitarists, such as Michael Schenker, like to leave the wah on and in a stationary position for a signature sound. Dunlop pretty much built a pedal just for that. This is a pedal with a volume, q-zone and peak knob setting. The volume controls the volume, obviously. The q-zone controls the zone of the wah you're looking for, and the peak controls the overall peak of the tone. It's kinda hard to explain, but once you mess with it, you'll hear what I mean.

Jim Dunlop pedals are pretty well known for being rugged, and this is no exception. You can throw this across the stage without a problem, it's that sturdy. The knobs feel great, the switch is fairly strong (although some do go out after prolonged stepping over years and years), the case is rugged and it is easy to use. To top it off, there's an LED. For some reason, there are other pedals out there that don't have an LED, and I'll never understand that. It doesn't take much effort to add an LED, and they don't introduce any tone suckage, so I have no clue why they constantly stray away from them in some pedals.

To say the sound is good is kinda hard to say. For one, you have to like that cocked wah sound. If you're a fan of that sound, this could be exactly what you're looking for. Instead of constantly trying to find that special place in the wah pedal, you can just set this to what you're looking for and leave it on. Or, if you want to have that cocked wah for a lead sound, this could be easier to use instead of a normal wah.