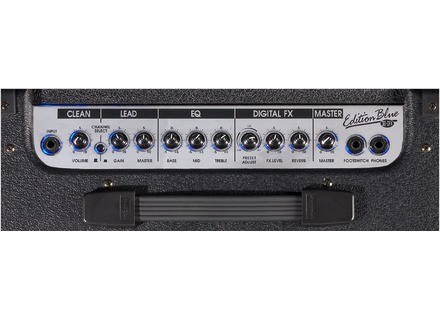 Hughes & Kettner Edition Blue 30-DFX
3
Afficher la traduction automatique
Afficher l'avis original
Hughes and Kettner has a plethora of different types of amps for any consumer and just about any style of music. The have the biggest multi channel amps and they have the smallest of wattage amps and even some am modeling and solid state. This is one of those amp that is a small watt solid state amp that is a convenient price and does a simple job and getting you decent enough tones for a practice or home jamming.

This amp is a modeler of its own. It doesn't model anyone else amps but just a solid state clean and lead. It definitely has the Hughes and Kettener tone by far. It has digital effects as well and it makes this amp a perfect practice amp for some. This is the exact same amp as the 60 watt version but cut the power in half and you get 30 watts. Basically the same features, tone, and voicing as the other wattage editions.


You gte essentially the exact same amp as the other watt editions but this one has 30 watts. This amp has a familiar tone that is distinct to hughes and Kettner. You have a classic clean channel which is a good clean for a solid state amp. The lead is edgy robust dirty channel that has a lot of gain on tap. This amp works with any guitar you throw at it. You can use a Fender Stratocatser or a Gibson Les Paul it really doesn't matter too much. The tone is there and it will adapt to what ever guitar situation you put it in.

This channel has enough gain for just about anyone to you. You also have a wattage selector on the amp as well. So you can drop the amp from 60 watt down to 30 watts and then cut it in half again down to 15 watts of power. This a great feature to get even more gain at a lower volume level. This is perfect for those who need to get a good tone and don't want to have volumes issues.