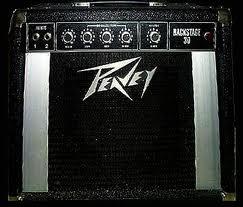 (contenu en anglais)
Afficher la traduction automatique
Afficher l'avis original
The Peavey Backstage 30 is a solid state guitar combination amplifier that can be used in any capacity you'd like. A client recently brought this guitar amp in to the studio to use an alternative amp to main full stack we were using to record guitar. The amp will deliver 18 watts of power, and it's got a single 10" speaker. The Backstage 30 has two 1/4" inputs in the front for your instrument, and I'm not sure if it has other connections in the back.

The make up of the Peavey Backstage 30 is really simple and easy to follow, even if you're new with guitar amps. The parameters that the Backstage 30 has to work with include just a three band equalizer, a gain knob, and a master gain knob. Even those who will be using this as their first amp should be able to understand what each of these simple parameters do. A manual isn't necessary for use with the Backstage 30, nor have I seen one.

The sound of the Peavey Backstage 30 is really nothing to write home about, but it does have it's own little sound going on. For starters, the amp really lacks a low end presence, so I wouldn't use this for recording or any serious sort of use unless you're going for that kind of sound. Rather, the Backstage 30 is best suited as a practice amp. You can get some decent sounding distortion on the amp if you turn the gain up a bit, but it's really crunchy and there isn't much wiggle room for changing the sound. This amp will get the job done for practicing, but beyond that I probably wouldn't recommend using it.

They are no longer making the Peavey Backstage 30 as far as I know, but you definitely still find one used if you're looking for a small practice amp. I don't think that this would be the amp I'd recommend for anyone looking for a practice amp, but it should really quite cheap used and is adequate enough to get the job done. If you happen to come across a used one at a cheap price it might be worth getting, but there are plenty of other practice amps out there that sound way better...
Le Peavey Backstage 30 est un amplificateur de guitare de l'état solide combinaison qui peut être utilisé à quelque titre que vous souhaitez. Un client a récemment apporté cet ampli guitare dans le studio d'utiliser un ampli alternative à la pile principale complète que nous utilisions pour enregistrer la guitare. L'ampli livrera 18 watts de puissance, et il a une seule 10 "haut-parleur. Les Coulisses 30 a deux 1 / 4" entrées à l'avant pour votre instrument, et je ne suis pas sûr si elle a d'autres connexions dans le dos.