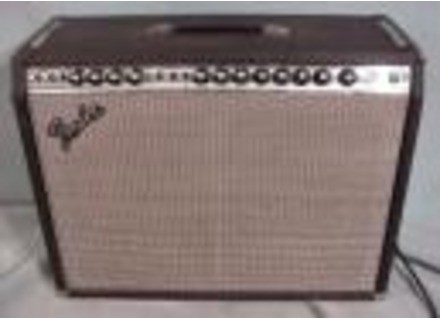 Fender Pro Reverb (Silverface)
5
Afficher la traduction automatique
Afficher l'avis original
There are a couple of different amps that can be designated a &quot;Silverface Pro Reverb,&quot; so let me be clear that I'm talking about a 1977 amp (judging by the codes on the transformers). This is a 70 watt model with solid state rectifier and master volume with pull-boost.

The front end of this thing looks identical to a Twin Reverb of the same era. The only difference between this and the Twin is that this has two 6L6 power tubes instead of four. This means that it is &quot;only&quot; 70 watts, though the amps is insanely loud.

Anyway, there are two channels, Normal and Vibrato. Both have Volume, Treble, Middle, and Bass knobs. The eq is very nice and user friendly, covering the entire tonal spectrum (when all three knobs are at zero there's no sound). This gives you all the flexibility you need for guitar without a lot of extra knobs and faders or anything. Everything you need and nothing you don't.

The Vibrato channel also has knobs for Reverb, and the vibrato's Speed and Depth. Then there's the master volume, though for this amp to sound its best you need to keep that knob all the way up and use the preamp volume knobs to set loudness. The inclusion of the master volume and the pull-boost feature on this amp are both major design mistakes, but if you keep the knob pushed in and on 10 all the time you'll basically have bypassed these flaws and drawn out the famous Fender clean tone.

Note, again, despite the existence of a master volume knob this is not a high-gain amp. If you're looking for distortion get a pedal or look elsewhere.

There are two things not to like about this amp. One is that it's really heavy, but mine has casters, so it's pretty easy to work with. The other is that it's way too loud for most aplications. Even with the preamp volume knob all the way up, there isn't much distortion; it's all clean headroom. You might think turning the master volume down is the way to go here, but the sound quality really suffers when you do this. With the master down below 8 the sound gets thin and dull, losing all the sparkle and heft that makes the Fender clean sound so magical. Normally I keep the master at 10 and the preamp volume at like 2 and a half. And, yes, it is still too loud for band practice.

The reverb, it need hardly be said, is incredible. I also love the vibrato on this thing, and I actually think I prefer this vibrato to the one on older blackface Fenders. This one is just smoother and gives a fuller sweep (from full volume to absolute quiet) without sounding cold or mechanical. It's more musical than non-tube vibrato but less noisy and less quirky than 1960s tube vibrato.

This amp is clean all the way, as I've already said. It's too loud to use for guitar except in playing a mid-sized club, which I don't usually get to do (though the one time I used the amp in this situation it really sounded great!). In practice situations I've run a Fender Rhodes through it with great results.

I don't mean to say the amp isn't good on guitar, though. Sometimes you want an incredibly clean, yet still warm, sound. Like playing jazz or playing a big place. And, like I said, the reverb and vibrato are superior.

The late-seventies Fenders have a bad reputation, which I think is undeserved. This is a great amp. If you want a very loud, clean sound this is the amp. And when I say &quot;clean&quot; I don't mean that it sounds lifeless or solid-state like. It's a big warm sound that is exactly what you expect from a classic Fender. True, you don't get a lot of power tube saturation here, but with the master volume dimed you do get a sense of the heft of the output transformer. If you only play in basements (which is currently the case for me) you probably want something smaller, but if you play to more than fifty people regularly, or you play jazz, this is a great amp. And if you have needs other than guitar (like electric piano, especially) this amp is awesome! Again, I can't say enough about how great the reverb and vibrato both sound.
Il ya un couple d'amplis différents qui peuvent être désignés un "Silverface Pro Reverb», alors laissez-moi être clair que je parle d'un ampli 1977 (à en juger par les codes sur les transformateurs). Ceci est un modèle de 70 watts avec redresseur état solide et le volume principal avec pull-boost.

Fender Pro Reverb (Silverface)
5
Afficher la traduction automatique
Afficher l'avis original
The Fender Pro Reverb Silverface is an electric guitar amplifier that I’ve used in a recording studio setting. It is similar to many of these vintage Fender guitar amplifiers, although I’m not sure exactly when this one was made. There are definitely a few different Silverface versions. I don’t have as much experience with the Pro Reverb as I do with the Twin Reverb and the Deluxe Reverb, but I’ve used it enough to know the differences and similarities between these classic guitar amplifiers. This is of course a tube amplifier, consisting of two different channels, with built in reverb and vibrato. It’s actually got a an identical make up to many of the other Silverface Fender amplifiers, namely the Twin Reverb. As far as connections go, you’ve got two ¼” inputs for each of the two channels, as well as a variety of connections in the back including your effect sends and to connect your head to the speakers. I don’t exactly what type of speakers are in here, but there are two of them.

Using the Fender Pro Reverb is quite easy. The first channel has parameters for volume, treble, middle, and bass, while the second channel is a bit more in depth and has parameters for volume, treble, middle, and bass like the first channel, as well as intensity and speed for the vibrato and reverb level. There is also a master volume knob, which is only found on Silverface versions of Fender amplifiers. If you know anything about guitar amplifiers, you’ll be able to use this amp without the help of a manual.

The tone of the Fender Pro Reverb Silverface is everything you’d expect from a vintage Fender amplifier. It’s got a clean tone that is as good sounding as any amp I’ve heard, and is definitely comparable to the other aforementioned vintage silverface Fender amplifiers. You can’t get much of a dirty sound from the Pro Reverb unless you turn up the volume on the channels and keep the master down a bit, which will definitely give you a bit of grit. The effects are top notch and are some of the best of their kind. The vibrato is definitely comparable to other Fender amps like the Twin Reverb, as is the case with the spring reverb. You really can’t go wrong with an amp that sounds like this…