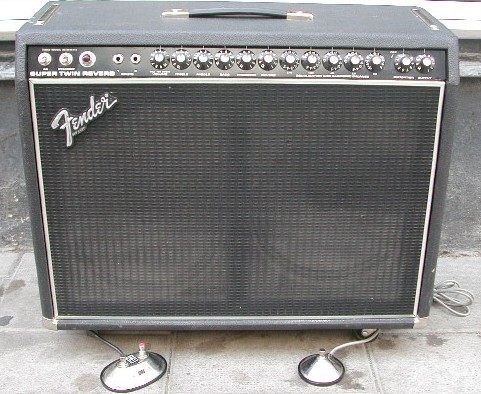 (contenu en anglais)
Afficher la traduction automatique
Afficher l'avis original
The Fender Super Twin Reverb is a guitar amplifier made in the late 1970's that is a follower of the classic Fender Twin Reverb amps. Being that this version is 'Super,' it has a number of features and controls not found on regular Twin Reverb amps, although I don't prefer this to the originals. Like all Twin Reverb amps, it's got 2 12" speakers. It has 180 watts of power with six 6L6 tubes in it as well as a 7025 preamp tube. Of course the amp has built in spring reverb, as well a distortion which isn't something found on other Twin Reverbs. It has two 1/4" input jacks in the front as well as a footswitch and speaker out jacks in the back.

The Fender Super Twin Reverb has a lot of controls, more than it's predecessor in the earlier Twin Reverbs. Included on the front panel of controls are knobs for volume, treble, middle, bass, presence, a series of five more EQ knobs, distortion, and lastly overall output level. It's definitely nice to have this much control, and even so I don't think the manual is necessary, although I've not seen it for myself.

The Fender Super Twin Reverb has a superb overall sound, but it's hard to live up to the name Twin Reverb in my opinion! Don't get me wrong, this is a great amplifier - I just prefer the silver face and earliest black face models over this one. There's a lot you can do with this amp due to the added EQ controls and distortion, but as for getting straight clean sounds, this isn't my favorite Twin Reverb. The reverb is great and much like the other Twins, and the distortion is definitely nice to have as well. This will give you a great tube amplifier sound, which is really the bottom line here regardless of it's predecessors.