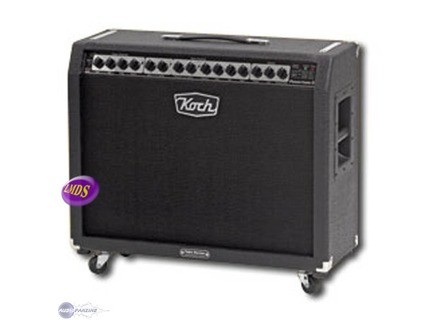 Koch Powertone II EL34
5
Afficher la traduction automatique
Afficher l'avis original
Koch is a company based out of the Netherlands and has been building great quality amps for musicians around the world. They have a good reputation as a simple guitar amps that are full of tone. These are high gain monster and they aren't sweet innocent clean amps. Koch is somewhere in between with their gain style and voicing structure.

This amp is their high gain ultra goodness amp. This amp is full of character and tonal pleasure. This is a fantastic amp and I don't mind saying one of the best tonal amps that I have ever heard. The Dutch did it right on this amp. This is three channels one for the clean, one for the gain, and the third for the ultra-gain. Each channel has a great tone and not separation that makes them pleasing to the ear.

This amp is the same amp as the head version but now in a combo version. You get you 12 inch speakers and nice cabinet to go along with it. This has all the same same features and the rest but just in a nice size combo version.

The clean channel is a very good British style clean that is sparkly but nothing like a Fender clean. The clean can chime but not the American style, but a darker clean. The gain channel is enough gain for most players out there. This channel has 4 gain stages and is a beast of a channel for rhythm and lead tones. The ultra gain is just enormous is tone and more gain that a gold vault. This has 5 stages of gain and is a killer channel. There is more gain than humanly possible and more gain than is really needed, but it is always cool to brag about more than enough gain. It is one killer channel and one of the best and most versatile amps that I have ever come across.

You still have the ability to hook this cab into another speaker cabinet and bypass the speakers that are in the cab. You also have the recording output to go directly into a house PA or a recording session.

This amp also has a voicing switch for all of the channels. I am very surprised that this amp is not more popular than it is because it is a remarkable amp. It also has two separate master volumes for soloing. Add reverb and a recording output and you have one of the most versatile amps on the market.