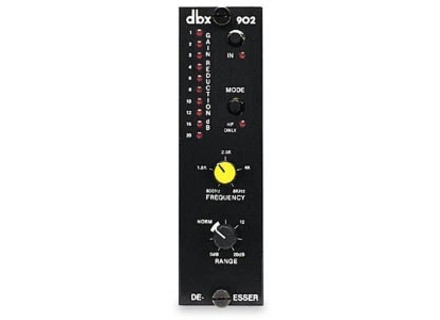 dbx 902
5
Afficher la traduction automatique
Afficher l'avis original
The Dbx 902 is a discontinued de-esser that fits inside a 500 series style casing. It is an analog piece of gear and isn't rack mountable in a traditional sense. Once you've hooked it up with your 500 series casing, which is necessary to use this, you'll have all your connections on chassis.

The configuration of the Dbx 902 is pretty simple and straight forward. There isn't anything that will really throw you for a loop here if you understand the basic make up of de-essers. It's just got parameters for frequency and range, as well as a button for mode and for bypass. That's really all that a user of the 902 will need to know about using this, so I don't think that a manual is necessary.

The sound of the Dbx 902 is definitely above average. I generally use de-esser plug-ins since I don't have anything at home in terms of outboard gear to use, but I am happy when I'm in a professional studio and they have a nice outboard de-esser to work with. It isn't that big of a deal since I'd say that only one of every five or so sessions I'll even use a de-esser, but for those sessions that I do need it, having something like this around is a huge plus. It has a very clean sound and does the job just about as good as any other de-esser that I've used, barring a few at the very top. It will at the very least definitely give you better sound than you would get with most de-esser plug-ins.

Although Dbx is not longer making the 902s, as quick Google search will tell you that there are plenty of dealers selling used ones out there, no to mention that I'm sure you could find some on eBay as well. The prices that I was seeing were very reasonable, although keep in mind that this can really only do one thing, albeit it does it very well. Dbx is a company that I wholeheartedly would recommend in general, and the 902 is definitely something worth checking out if you've got a 500 series rack and are looking to add an inexpensive de-esser.
Le Dbx 902 est un abandonnées de-esser qui s'adapte à l'intérieur d'un boîtier de la série 900. C'est une pièce d'équipement analogique et n'est pas montable en rack dans un sens traditionnel. Une fois que vous l'avez branché avec votre boîtier 900 séries, ce qui est nécessaire pour utiliser cette fonctionnalité, vous aurez toutes vos connexions sur le châssis.