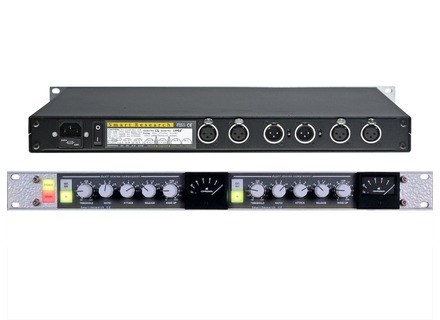 The C2 compressor houses two independant mono compressors, or in STEREO mode, the left-hand controls operate both audio channels, with the right-hand controls not used, giving true Stereo operation. The C2M version has one set of controls and two audio channels for Stereo use, whilst the C2R is a dual channel remote expander for building up to 8 channel systems controlled from one C2M or C2.

The characteristic sound of this unit arises mostly from the fast response at the onset of compression, which when delayed to occur around the mid range attack settings (after 0.3 to 3 milliseconds) results in a window through which transients can still pass. When used accross a mix, or with any dynamic programme, this has the effect of adding 'punch', as the sidechain 'breathes' around these transients, while still controlling overall levels. CRUSH mode has been developed as an extension of this 'musicality', adding to and accentuating the factors involved in producing the character of the unit. CRUSH may sound surprising to those interested in more gentle applications, being capable of exaggerated compression effects, but in conjunction with the fast limit settings also introduced with this unit, it allows the C2 to be used for a much wider range of applications than the C1.

In a normal C2 unit, when in 'Stereo' mode, the left channel front panel controls become the masters for both the left and right audio paths, and the right hand controls become inactive. Both audio paths are 'sensed', the result processed, and then acted on equally to eliminate image shift (so a 'peak' on either channel results in the compression of both). By extension of this method, in a multichannel system, the master set of controls can be interlinked to sense and control any number of audio channels where image shift would otherwise be a problem. When 'stereo'or 'left master' mode is selected, the left hand front panel controls become the masters for all channels in the system.

A multichannel system comprises a master C2 or C2M unit, to which is added one additional remote controlled 1RU audio rack per pair of extra channels needed. A four channel system would therefore need one master C2 (or C2M), and one C2R (remote C2). The system can be extended as needed, for more or less channels, or the additional channels unplugged and the master unit used on its own functioning as a normal unit (the only difference being that the 'sidechain' XLR connectors on the rear panel are changed to multipin types for additional control lines to and from the C2R chain). As an example for film mix formats this can be used to build a system with three interlinked channels for L-C-R to avoid image shifting, with suround L-R handled by a second pair of channels. Sub bass can be either processed separately or combined with the surround channels.

This approach has been adopted for two reasons: first as the most adaptable in allowing for different choices of mix formats and the ability for additional C2R channel capacity to 'float' between control rooms or be purchased as needed, and second because of being able to offer the C2R unit at a more reasonable sale price than a complete unit. In allowing for the above configuration, we have also provided for further customisation. The master C2 unit has an external fader input, and we would be happy to discuss any further modifications required.