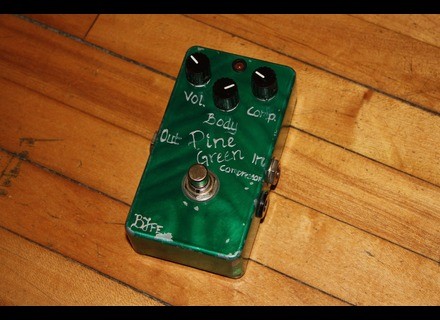 - Bjorn style wiring (love it or hate it)

Very simple and straight forward to use. Bjorn does ship these with a one page manual, but there really isn't a whole lot on there that you shouldn't be able to figure out by yourself, so if it got lost between users, no worries.

The volume and compression knobs are pretty common, they do exactly what they describe. The Body knob isn't something I've seen before. It really dials in "character" to your amp. Yep, that sounds weird, but thats what it is. Very cool features.

The paint job is beautiful, but chips very easy, and can become pretty ugly fast. Kindof annoying for a pretty expensive pedal.

The pedal will protect itself from adapters of the wrong polarity which is a really cool feature especially for something so expensive.

The wiring is, shall we say unique? I've seen a few of these with the goop removed, and they don't look pretty. Definitely nowhere neat as other boutique builds on the market. I've heard some concerns that this can effect reliability. Personally, I've never had a problem, but was a little annoyed that something I paid a pretty penny for looks like it didn't really receive a whole lot of care in the build process.

It sounds incredible. Simple as that. Take any amp sound, through the PGC in front of it, and you have that amp sound but better. You really do need to try it out before that's quite that clear, but I'm telling it like it is. There are some decent videos on youtube that give an OK indicator of this.

The compression is overall pretty subtle. You CAN get squashy sounds, but will need to max out that comp knob. Mostly, it adds some really beautiful sustain, and a ton of character and clarity. The body knob really does great things to your tone, and you find yourself having a really hard time switching it off.

It's very good. That's really the simplest it can be put. This has been described the compressor for people that don't like compressors, and I can see why. It doesn't take over your tone, it won't kill your dynamics, and it sounds absolutely fantastic.

Unfortunately, BJFe stuff isn't that easy to get hold of. The waitlists are LONG and rarer pedals like the PGC just aren't made very frequently by the one man operation. Used prices are a little ridiculous on this one, I've seen it go for $850 on ebay before.

All in all, if you can afford one, or find a used one for a good price, pick it up, it is fantastic. If not, I'd take a look at the Diamond compressor, which is very similar is terms of use and feel.
- Contrôle du volume, de compression, et «corps»