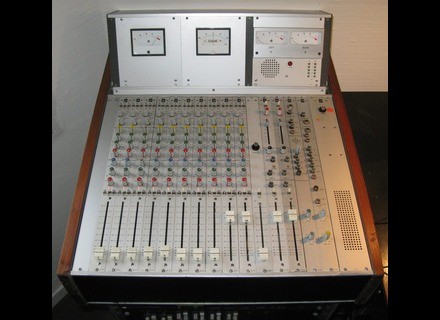 EMT Mixsystem 100 (M100)
5
Afficher la traduction automatique
Afficher l'avis original
This mixer have been ordered in the early 80s by Radio France for the recording of Concrete and classical music. EMT worked with a German company named ABE for its manufacture. The Mixsystem is very similar in look and in part in its design to the Studer 169 but unlike Studer, its design is simple (in a good way), making it easier to maintain / modify.

As with the Studer, we can link more channels at will.

Pierre Henry has a M100 20 tracks (See photo studio P. Henry: http://www.lefigaro.fr/culture/2007/12/29/03004-20071229ARTFIG00001-pour-ses-ans-pierre-henry-surprend -encore.php). Pierre Boulez worked with the M40, built around the same channels but with sub groups. For those who're interested into classical contemporary music you'll have an idea of what were their quest into sound quality ...

In a more modern style, the studio "The Pool" has a M100 30 tracks and recently Nick Nave, bloc party, franz ferdinand, The Horrors have seen this base ...

The basic configuration is made up of:

The table is rackable because it has the size but must be handy. It can be considered portable being quite heavy though.

I put a Nine for the 2 fixed freq EQ but one can't be compact and have everything isn't?

I love this little beauty, unrecognized, rare. Having worked on a Sonny MPX200 then Amek Angela, the EMT, although being simplest, is by far my favorite.