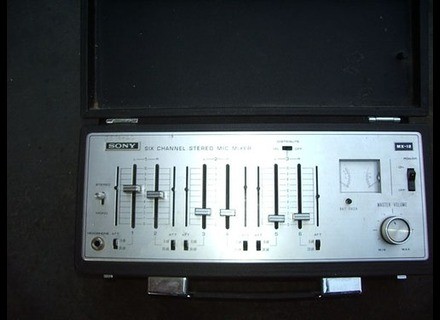 Sony mx 12
4
Afficher la traduction automatique
Afficher l'avis original
This was a good low cost mixer for it's time. It has 6 mic/line inputs which may be used as 6 mono inputs or 3 stereo inputs. The mic inputs are low Z unbalanced using 1/4 inch jacks. The line inputs are high Z unbalanced using RCA jacks.
The mic level outputs are 1/4 inch jacks, the line level outputs are RCA jacks
at -10dB.
There is a 20dB switchable pad on each input. There is a rotary master gain pot and a dual mechanical VU meter. There also is a headphone jack but no headphone volume control.
It will operate on 6 D cells or an external power supply.
I have used mine for live recording, P.A. mixing and radio broadcast mixing.

This is a very basic portable desk-top mixer. All controls are on the top panel. All connections are on the rear.

It has been years since I measured the performance but at the time the frequency response was flat from 100Hz to 20KHz. Noise was about -60dB.

This mixer proved to be very versatile and I used it hard for 20 years or so.
This was be best thing going at the time I bought it. I have since acquired other mixers with features we take for granted now, which didn't exist in that era.