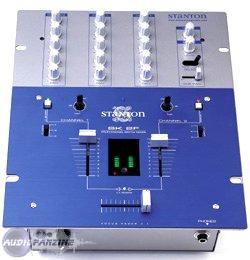 Very easy to use

The sound quality in the beginning was alright, after a few months the outputs started to break and the sound got more hissing and sometimes it would lose one channel output, so that i could only hear my sound from the left or right speaker...

Here is the main problem its weak, terribly weak... i have the feeling that it was built by a guy that got drunk the whole weekend, woke up wrapped in toiletpaper and with a painfull butthole, and instead of taking the day off to recover, he went working that monday morning my mixer outputs flipped, suddenly stopped working, my headphone plug fell into my mixer, i had it repaired several times... instead of repairing it with a bolt they repaired it using weak glue and duct tape on the inside... it got stolen, but honestly, i don't care... i had a hak 300 at that time that was 10x better

i hate it... i had to take it four times in a year to a store to repair, wait everytime three weeks to find out it still wasn't repaired correctly... once i had a gig during one of these times so i had to buy a replacement mixer (the hak 300, who was 10x better than the piece of crap SK2F) the stanton sign is a warning sign... a sign that says STOP, don't buy this equipment, it's crap