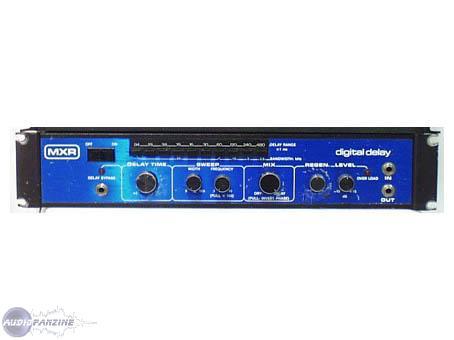 (contenu en anglais)
Afficher la traduction automatique
Afficher l'avis original
The MXR Digital Delay Blue is a piece of outboard gear, manufactured in the 1980's. Like the name states, it is a digital based delay, and has 1/4" TRS connections in the front of it for input, output, and delay bypass. It comes in a two space, rack mountable casing.

The overall make up of the MXR Digital Delay Blue is fairly simple to get acquainted to. For setting controls, you've got knobs for delay time, sweep width, sweep frequency, mix, regen, and overall level. It also has a series of buttons to choose the delay range, which spreads from fractions of millisecond to 160 msec. I've never had a need to seek out a manual for this Digital Delay, but one isn't necessary and would probably be hard to locate one anyway since this is an older piece of gear.

The MXR Digital Delay Blue has some pretty cool sounds to bring to the table, but isn't one of my favorite sounding delays in terms of outboard gear. Since it isn't an analog based delay, it doesn't have the warmth or fullness that I would look for in an outboard delay. As far as I'm concerned, I can get this sort of sound inside of the box in a Pro Tools plug-in, which is something that was obviously not available when this was being made. Don't get me wrong, it definitely has a very good sound, I just don't think it would be worth it to have one if you've got some good sounding plug-in delays like I do, as there isn't enough of a sound quality to warrant the hassle of using it.

I haven't seen all too many models of the MXR Digital Delay Blue out there in terms of in studios or even for sale, so it seems to be somewhat of a rare item. I'm not even sure what type of price these would go for, but I would imagine that they wouldn't cost too much. If you're looking for a delay in the form of outboard gear, I'd highly recommend getting an analog delay, as this digital delay type of sound is easily achievable with a plug-in without having to route a piece of outboard gear...
Le MXR Digital Delay Le bleu est une pièce d'équipement hors-bord, fabriquées dans les années 1980. Comme son nom l'indique, il s'agit d'un délai numérique basée, et a 1 / 4 "TRS connexions à l'avant de celui-ci pour l'entrée, de sortie et de dérivation de retard. Il est livré dans un espace à deux, en rack boîtier montable.