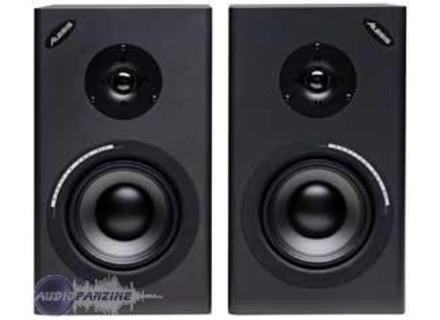 Alesis Monitor One
4
Afficher la traduction automatique
Afficher l'avis original
Alesis' Monitor One MK1's are a set of passive studio monitors. They're designed for any application in the studio, but you'll probably find these more in home studios than you would professional studios, or at least you won't find them as your main near fields in a pro studio. Since the monitors are passive, they'll require an external power amplifier. I don't remember off the top of my head the power amp used with the set of particular Monitor One's that I've used, as they're at a client's home studio, but I do know that it's also an Alesis power amplifier. The Monitor One MK1's differ from the newer version in that I believe the new ones are active and won't need an external power amplifier...

The sound of the Alesis Monitor One MK1's is overall pretty good. While certainly not the most accurate monitors in the world in terms of having the full frequency spectrum covered, they do seem to be pretty true and translate well. I'd compare them to something like a Yamaha NS-10, but I think they sound a bit better since they cover the low end a little better. They're probably not the best for mixing, but can do the job if you know them well. I'd recommend them for a home studio owner or as a B set of speakers in a larger professional studio.

Alesis Monitor One
4
Afficher la traduction automatique
Afficher l'avis original
They have been on the market for years now and when I started my research on good monitors with a decent price tag this name always popped up. I am not quite sure anymore why I originally chose the passive versions (I also bought an Alesis RA-100 Amp).
There is nothing much to say about these speakers - two separate drivers for highs and lows and connections on the back for speaker cables. I would have preferred to have a couple of Jack inputs as well. Also in the version I own (I bought them about 9 years ago) they had little protective covers on the corners that fell off by just looking at them...really annoying. I think they fixed that though with the 'mkII' version.
I use them mainly for mixdown at home.

I think these speakers are quite accurate. They lack a bit of low mids so when mixing down I have to be careful to not add too much around 200Hz. I also always thought that the stereo image could be a bit broader - I believe this issue has been vastly improved especially with their active speakers.
As I said - the sound does not get enhanced (unlike a lot of other monitors) and you have a pretty good picture of the sound you are mixing. I sometimes wish for highs to be a bit more airy and the lows to be a bit more present.

After nine years of use I am still quite happy with them although I am planning on having them replaced by their active counterparts here pretty soon. I believe that there really isn't the perfect studio monitor as they all do have a certain character. The more you mix with one the more you get to know it. The Monitor One does not really sound 'nice' but that is a compliment because I can have that later on my stereo. I want a good representation of the sound I am working on and the Monitor One does deliver just that.