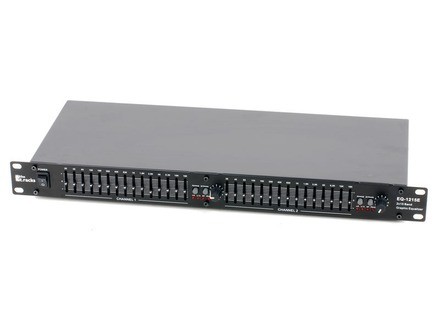 the t.racks EQ 1215E
4
Afficher la traduction automatique
Afficher l'avis original
The T-racks EQ 1215E is an analog hardware stereo equalizer. T-racks is primarily known for making plug-ins and software, but the EQ 1215E is one of the few pieces of hardware that I've used from them. Each of the two channels has 15 bands, which has frequencies that are pretty well placed. Each channel has both XLR and 1/4" connections to work with, and it is a rackable piece of gear that will only take up a single space.

Using the T-racks EQ 1215E is extremely simple, even if you don't have any experience with equalization. As long as you understand what an equalizer is and what it does, you'll be fine. Simply cut or boost any of the fifteen bands that you have available. A great feature that this has is that you can either set the range to +/- 6 or 12 db. It also has knobs for setting your output level and a bypass button as well. I don't think a manual is necessary for using the 1215E.

The T-racks EQ 1215E generally has a pretty clean sound. It isn't really anything to write home about, but it will definitely get the job done for simple equalization. I generally prefer using parametric EQs, but this one is set up pretty well, with useful fixed frequencies and plenty of control to zoom in on the sound that you're looking for. It is definitely suitable for use with any and all applications, as it isn't like it will perform better for one thing or another - it is all about how you set the bands and what you want to do with it. It won't color your sound with noise or in any other way other than how you manipulate it yourself.

I definitely haven't seen many models of the T-racks EQ 1215E out there, but you can buy them if you want one. I can't necessarily say that I would recommend this over too many other graphic equalizers, as it doesn't have much to make itself stand out. Having said this, it will definitely do the job more times than not if you're looking to use a graphic EQ. For more simple equalization, I'd recommend looking at some of T-racks' plug-ins, as this is what they are best known for, but if you do come across the 1215E, it is definitely worth a second glance.
Le T-racks EQ est un égaliseur 1215E matériel analogique stéréo. T-racks est principalement connu pour faire des plug-ins et logiciels, mais le 1215E EQ est un des rares pièces de matériel que j'ai utilisé de leur part. Chacun des deux canaux a 15 bandes, qui a des fréquences qui sont assez bien placés. Chaque canal possède deux connecteurs XLR et 1 / 4 "connexions à travailler avec, et c'est un morceau rackable d'engins qui ne fera que prendre un seul espace.