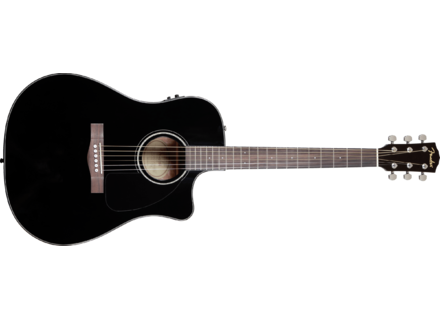 Fender CD-60CE [2011-2016]
4
Afficher la traduction automatique
Afficher l'avis original
To start off this review, I want to say that 95% of what I play is on Electric guitar. But I took a couple of guitar classes that required an acoustic guitar, so I went shopping for one. I settled on this particular one for reasons that I'll explain later in the review. For now, here are the basic specs on it:

Sunburst finish (Hence the "SB" after the model number)

20 Frets. The neck on this thing is pretty decent for an acoustic guitar, though I have fairly big hands, so your mileage may vary.

Tuners on this thing are your standard Grover-style knock-offs

I have to say, I was pretty impressed with the build quality on this guitar. So far, the only thing that I've found shabbyfaulty is the tuner-on switch. Whatever latching system it used has since broken, and to tune you have to hold the button down. Not exactly practical, so I'll probably have the tech at my local shop take look at it.
Besides that, I haven't found any faults with the build quality, and I'm pretty picky when it comes to this stuff.

Fret access is good for an acoustic guitar, as it is a cutaway, which is one of the top reasons I got this guitar. The fret job on the neck was also well done and I haven't developed any problems with dead notes, etc.

While I'm sure that this doesn't sound near as nice as a Gibson or a Martin, I didn't need a several thousand dollar acoustic guitar for a couple of classes. That being said, out of all of the sub $500 dollar acoustic guitars at the store, this one sounded by far the best. My only complaint is that it is a little on the dull side, but I think I can fix that with a set of brighter strings.

When I do play acoustic guitar, I like to play stuff that has powerful chords and a lot of movement in it, think the acoustic parts to Metallica's "Fade to Black". This guitar works decently well for what I use it for, even if I do wish it was a brighterjangly-er.

Overall, I have to say that I am more than pleased with the purchase of the guitar. $300 with a Fender hard-case for a guitar that sounds this good is a absolute steal. I tried out all of the other sub-$500 acoustics in the store, and this one sounded the best. I would buy this same guitar again in a heartbeat, because it not only sounds great, but the price was great as well.